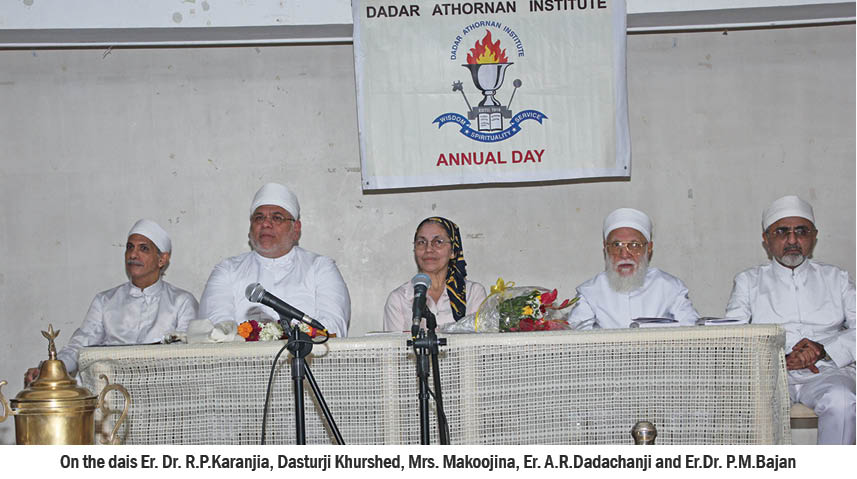 Following a humbandagi by students of the Madressa and a short Tandarosti prayer by the junior students, Er. Dr. Ramiyar Karanjia announced Vada Dasturji Khurshed Dastoor as the tenth recipient of the ‘Rustomji Panthaki Award’ for the ‘Best Ex-Student’ of the Madressa and extolled Dasturji Khurshed’s various achievements and leadership positions, and was presented with a shawl, a silver salver and a garland by Er. Aspandyar Dadachanji. Chief Guest, Bannu Makoojina was introduced by Er. Dr. Ramiyar and felicitated for being the dynamic Principal of JB Vachha High School, who not only promotes extra-curricular activities like sports, music and dance, but also supports Parsi students immensely and promotes the Zoroastrian religion. Her latest achievement has been in switching the school from the SSC stream to the ICSE stream upto the 6th standard currently. 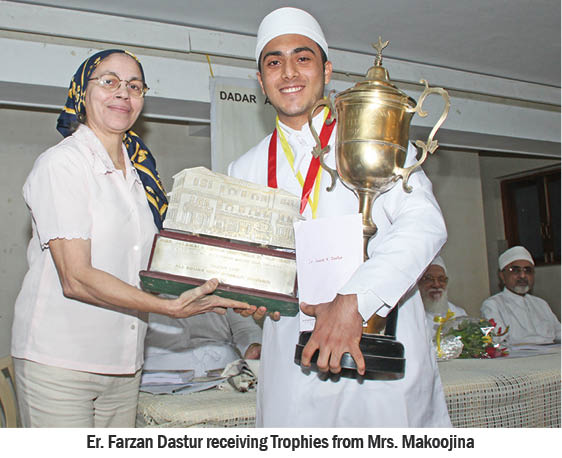 Er. Dr. Ramiyar Karanjia delivered the Annual Report, mentioning three new admissions this year, thereby increasing the total of the number of students to 23, initiation of a few students as navars and martabs, and complimenting Er. Farzan Dastur for topping the Parsi students list at DPYA in the SSC examination with 86%. Er. Darius Bajan was thanked for being the Prayer Examiner and guiding the students, while Er. Dr. Ramiyar mentioned that many foreign scholars visit the Madressa to study the institute and its various activities. During his Presidential address, Vada Dasturji Saheb reminisced about his days as a student at the same Institute where he and Er. Dr. Ramiyar Karanjia shared the classroom bench. He emphasized that the community must accord respect and dignity to the priesthood and recalled that Er. Rustomji Panthaky always exhorted his students to maintain the dignity of the Paghdi, the Crown of the Mobed.

In his tribute to Er. Rustomji Panthaki, Dasturji Khurshed reminisced that Er. Rustomji and his wife Jalamai were like parents to the students. Quoting a statement by Late Er. Rustomji, Er. Ramiyar detailed his life since his birth in 1917, to his enrolment, study and ordainment as a full-fledged Priest at the Dadar Athornan Institute from 1928 to 1934, his short tenure as a priest at Nargol, then his tenure as full time priest for 15 years at the Rustom Faramna Agiary, and his dedicated tenure as teacher and Principal of the Dadar Athornan Institute from 1966 till 1994, during which period he worked towards making the Madressa famous globally. Er. Dr. Ramiyar read excerpts of Er. Cyrus Darbari’s tribute to Rustomji and mentioned that Er. Rustomji had donated Rupees One Lakh, almost his entire life savings, to the Madressa.

The occasion also witnessed the release of the Madressa book which is a delightful compilation of facts, puzzles and articles in English, Hindi and Gujarati edited by Er. Cyrus Sidhva, teacher at the Madressa and DPYA High School, by Er. Rustomji Panthaki’s family. Er. Sidhva conducted the Prize Distribution, which witnessed Bannu Makoojina distributing awards to 22 students for excellence in prayers, academic achievements, religious studies, extra-curricular activities and all round excellence. Mrs. Makoojina praised the efforts of Er. Dr. Ramiyar Karanjia, his wife Havovi Karanjia and the entire staff of the Dadar Athornan Institute for the holistic complete development of the students. Er. Sidhva was felicitated by Mrs. Makoojina.

Er. Kersi Karanjia proposed the vote of thanks, which was followed by renditions of two Monajats, a Parsi song, a skit Sundar Sikhaman, written by Er. Rustomji, renditions of Chhaiye Hame Zarthoshti and the National Anthem, followed by delicious snacks served by Kersi Gazdar’s Grub Corner.