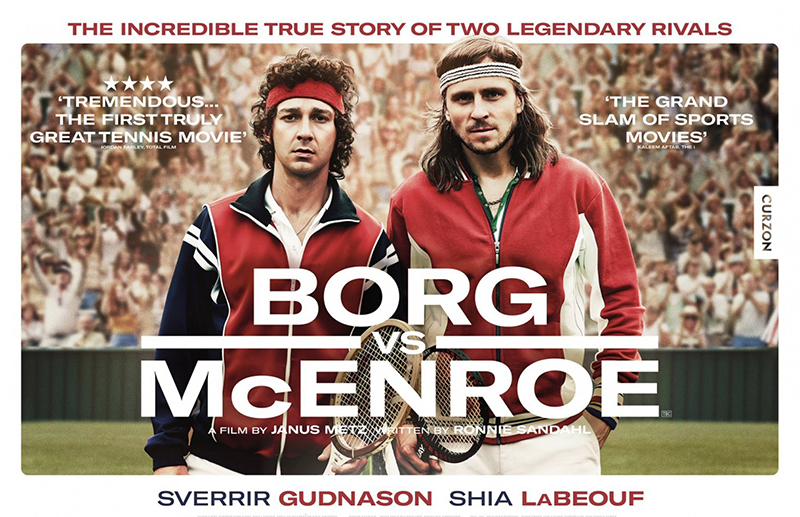 It’s the impertinent versus the imperturbable – the cocky versus the cool as cucumber. The 100 minute film braces us for the tennis match of the century – the thrilling five-setter of the 1980 Wimbledon finals in which the upcoming superbrat had threatened to halt the champion’s march to a fifth consecutive title.
Shia LaBeouf portrays American John McEnroe, whose undeniable talent was supremely counterbalanced by his nasty and grating onfield outbursts. Contrasting in behaviour, attitude and demeanour is Bjorn Borg of Sweden (played by the Swede Sverrir Gudnason). The film explores the two players’ schooldays – with McEnroe’s mother admonishing the youngster for getting 95 out of 100 in his exams and the young Borg’s (played by Bjorn’s real son Leo Borg) volatile nature in his formative years and his fragile temperament.
With occasional flashbacks of their childhood, director Janus Metz explores the athletes’ mental makeup three days prior to the big day — the Wimbledon finals.
With the last 20 minutes devoted to the match itself, the film is almost solely aimed at tennis fans, those of the two adversaries in particular. Apart from the gleanings of their childhood, writer Ronnie Sandahl leaves barely any scope to justify the biographical nature of the film. Gudnason’s uncanny resemblance to Borg and the latter’s hot-cold relationship with his coach-cum-mentor Lennart Bergelin (Stellan Skarsgard) are the focal points of the film. LaBeouf’s similarity to McEnroe is not as conspicuous but the actor more than makes up for it by an outstanding performance.
In real life the two remain best of friends despite the Swede having retired from the sport at the tender age of 26.