With Christmas approaching, The National Centre for Performing Arts (NCPA), celebrated its annual Christmas Party with over 170 children from NGOs across Mumbai on the 15th of December, 2017, at the NCPA, Nariman Point, South Mumbai. The celebration included children from – Apun Ka Club, Bal Jeevan, CHIP, EAR, Jai Vakeel and other NGOs. It also included children who have been adopted by NCPA’s Indian Music Department under their CSR initiative – Music for Kids. 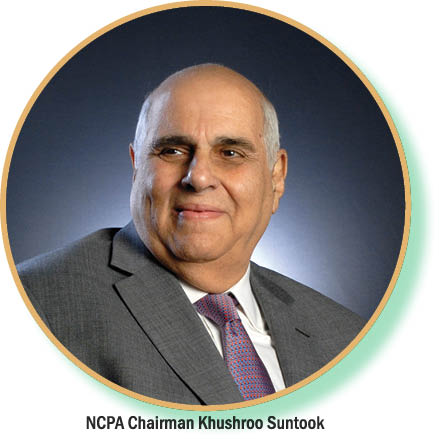 Mr. Khushroo Suntook, Chairman, NCPA said, “Christmas is a festival of benevolence, love and cheer. Every year we aim to share the joy of this season by bringing smiles to the faces of young children who are less fortunate. This year we have an exciting evening planned which will be truly entertaining and memorable for the children.”

The Christmas celebration began with The Symphony Orchestra of India (SOI) musicians singing Christmas carols, followed by their performance on Bollywood songs. Next was an interactive dance performance by Shiamak Davar’s Victory Arts Foundation, which aims to provide a platform to address social causes and concerns using the power of dance as a therapeutic medium to bring joy to the underprivileged, physically and mentally differently-abled, visually impaired, the deaf and mute, and makes dance a viable and respected career option. The evening concluded with the arrival of Santa Claus who spread Christmas cheer by distributing gifts and sweets to all the children present.

Inaugurated in 1969, the National Centre for the Performing Arts (NCPA), Mumbai, is India’s premier cultural institution. The first multi-venue, multi-genre cultural centre to be built in South Asia, it has been committed since its inception to preserving and promoting the country’s rich and vibrant artistic heritage, as well as presenting new and innovative work.

Today, the NCPA presents more than 600 events each year, making it India’s largest and most holistic performing arts centre. These events encapsulate all major art forms, most notably Indian Music, International Music, Theatre and Film, Dance, and Literature, Visual Arts and Photography. There are Heads of Programming for each of these art forms who curate innovative events and festivals; representative of everything from classical to contemporary throughout the year. The NCPA produces its own programmes as well as collaborates with leading cultural promoters from around the world. NCPA is the only member organisation of the International Music Council (IMC) from India.

The NCPA was the brain child of JRD Tata and Dr. Jamshed Bhabha, two Visionaries who saw the need for a world-class performing arts centre in India. The NCPA campus boasts ﬁve theatres, two galleries, multiple libraries and numerous reception spaces. The NCPA houses some of the best auditoriums in India in terms of equipment and expertise, including the Tata Theatre, designed by the renowned post-modernist American architect Philip Johnson.

As India’s role on the international stage expands, the NCPA must also have an eye towards international arts. The NCPA presents several international groups and continues to collaborate with arts organisations and theatres around the globe.

In 2006, the NCPA established the Symphony Orchestra of India (SOI), the country’s only professional orchestra, founded by NCPA Chairman Khushroo Suntook and violin virtuoso Marat Bisengaliev, who serves as the Music Director along with associate music Zane Dalal.

The NCPA places great emphasis on education across genres and has developed a reputation as a major centre for training and education. Educational work includes programmes following the ‘Guru—Shishya tradition’, which has a direct bearing on preservation and propagation of Indian music, as well as the NCPA Special Music Training Programme, which provides advanced musical training by members of the 801.

As part of its mission to preserve India’s cultural heritage, the NCPA has built up extensive archives of more than 6,000 hours of music and film recorded at the NCPA since its inception, including performances by Pt. Jasraj, Bismillah Khan, Rashid Khan, Hariprasad Chaurasia, Gangubai Hangal, amongst others. The NCPA Library is the only specialist performing arts library in the city of Mumbai. The collection comprises more than 20,000 books about the performing arts and other cultural spheres.

Now approaching the ﬁftieth year of its existence, with an ever-expanding list of performances, educational projects, exhibitions, and much more, the NCPA, which is hugely supported by the Parsi community, continues to build on its reputation as India’s premiere arts centre, and one of the leading arts centres in Asia.