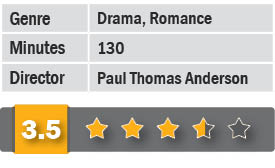 Come Oscar time, and the best that Hollywood has to offer is on display. After ‘There Will Be Blood’ (2007), Phantom Thread reunites director Paul Thomas Anderson and the hugely talented Daniel Day-Lewis.Confirmed bachelor Reynolds Woodcock (DDL) is a scrupulously painstaking and perfectionist couturier – sewing handmade garments for royalty, millionaires and socialites. He hires models – most of them turning muses in no time – and almost as soon, fires them on some pretext in collusion with his sister Cyril (Lesley Manville), who’s also his confidante. Till one day, breakfasting at a seaside resort restaurant, he meets Alma (Vicky Krieps), a waitress. Within less than ten minutes into the film, Anderson brings us one of the most seductive on-screen scenes, but by no means, physical.

With his enigmatic smiles and some quizzing dialogues, Day-Lewis, who’s hinted at retiring from acting after this film, brings his enormous talent to the fore. The physical chemistry, which at one point seemed imminent, quickly dissolves into a relationship which at times seems strictly business, and at times simmering at the surface. Even as the emotions play out eloquently and the actors engage in mind games, Anderson (who’s also co-written the film besides being in charge of cinematography) projects Reynolds as over-meticulous and fastidious – even the sound of Alma buttering her toast or pouring out tea is unnerving to him. The viewer gets the distinct feeling that the plot is subservient to the build-up of the characters.Nominated for six Oscars including Best Film, Best Director and Best Actor (Krieps astonishingly missing out despite a stupendous performance), PT would fancy its chances in Best Music (Jonny Greenwood) and Best Costume Design  (Mark Bridges, who won the award for The Artist in 2011).