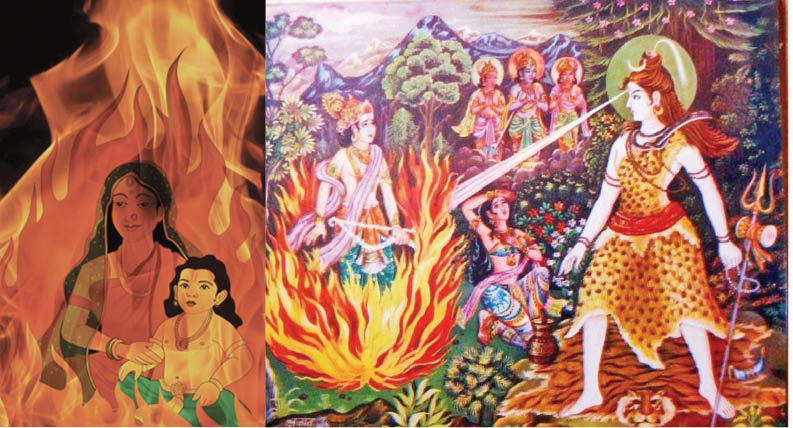 Holi signifies Change (from the cold winter to the warmth of spring), Colour (with all Nature awakening from its dull winter sleep to a riot of seasonal colours) and Love (which unfolds with the warmth of bonfires and festivity which foster friendship and bonding).

As a spring festival, Holi provides one and all with the opportunity to appreciate, rejuvenate and celebrate all relationships that matter to us! The festivities, rich in colour and symbolism, bring people together in the spirit of bonhomie and merriment. Indeed, it’s the day for resolving old conflicts and renew strained or frayed relationships. Traditionally, this day provides an opportunity for enemies to resolve conflict by playing with each other using water as a coolant and colour as a joyful binding force. The Holika bonfire in turn symbolizes the burning of evil.

Holi was originally a spring festival of fertility and harvest but, a number of myths and legends are also woven around it. Myths and legends are significant in their value as literature, offering timeless and universal themes which provide insight into the past and help us to see how much humankind had and continues to have in common.

The Legend of Prahalad and Holika

Holika was a female demon, and the sister of Hiranyakashyap, the demon king. Hiranyakashyap considered himself the King of the Universe and higher in rank over all other divinities. Prahalad was Hiranyakashyap’s son. Hiranyakashyap hated his son because Prahalad was a very faithful devotee of the Lord Vishnu. One day the king asked his son, “Who is greater, Vishnu or me?” “Vishnu is,” said the son, “you are only a mortal king.” The king was furious and decided to kill his own son in a fit of anger and arrogance. Several attempts were made to kill Prahalad but he survived them all including when he was thrown over a cliff, trampled by elephants, bitten by snakes and attacked by soldiers!

Finally, Holika the sister of Hiranyakashyap seized Prahalad and sat in the middle of a huge bonfire with the boy on her lap. Holika had been given a boon by the gods which made her immune to fire, so she thought this was a good way to destroy her nephew without any harm to herself. But, Holika forgot that the boon given to her was conditional. She would be immune to fire only as long as she did not misuse her power for evil. If she ever used her power for evil, the boon would stand revoked. Thus, when she sat with the devout Prahalad on her lap, the fire reduced her to ashes while Prahalad survived.

This story is a reminder that with great powers come greater responsibilities. Power should be wielded to do good and not evil. Power should be balanced with gratitude and humility, not defiance and arrogance. To this date huge bonfires are lit on Holi and in some parts of India even an effigy of Holika.

The Legend of Radha and Krishna

Krishna was dark skinned whereas Radha was fair. When Krishna asked his mother Yashoda why he was dark and Radha so fair, she told him that he could smear Radha’s face with colour and change her complexion. The playful and mischievous Krishna did just that and that’s how the tradition of playing with colours originated. ‘Barsana ki Holi’ is observed to celebrate Radha’s divine love for Krishna. Thus, the festival of Holi commemorates friendship and love and provides an opportunity for enemies to forgive each other, burn their differences and colour their relationship with joy.

The Legend of Shiva and Kamadeva

Kaamdeva (originally a divinity of lust) was cursed by Lord Shiva and reduced to ashes by the power of an angry Shiva’s third eye. On the tearful requests of Kamadeva’s wife Rati, Lord Shiva restored him, but only in spirit and representing ‘true love’ rather than in physical form embodying lust. Thus, Holi also embodies the essence and spirit of true love which supersedes lust.

The rationale behind tradition…

Bonfires are lit and coconuts along with tender plants of Vasanta (Spring) like mango and neem flower stalks are thrown into the bonfire. The smoke emitted from the burning of these plants has an antiseptic effect, fumigating the atmosphere as the season changes from winter to spring.

In ancient times the colour used was only the colour of boiled Kesuda (flowers of Palasha tree) along with dried Abil and Gulal powders. Kesuda and Mogra flowers are coolants which protect against heat and sunshine.

The bright colors of Holi represent energy, life and joy. As human beings we associate several emotions with colour – Red with Rage, Green with Jealousy, Saffron with Sacrifice and Pink with Love.

On this Holi ask yourself the question: “If I am to paint my life, what colours would I use?” Remember that your life is the canvas, but, you alone are the artist. Choose your colours with care and paint your canvas with joy!