Though Hong Kong is blessed with very few Parsis, they are a united, warm, friendly and generous lot. The Zoroastrian Club is an imposing structure that does justice to the high socio-economic status Parsis enjoy on this lovely island. Many roads in Hong Kong begin and end in a quiet corner of Happy Valley: the Parsi Cemetery. Amid the sculptured evergreens and kumquat trees, stand memorials to Sir Hormusjjee Nowrojee Mody, Cawasjee Kotwal and Dhunjibhoy Bisney, pioneers of the island’s economic success, and the greats whose names even today grace some of the busiest streets in Hong Kong. 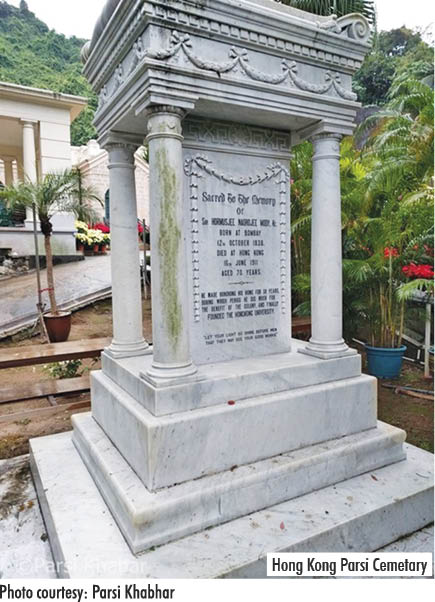 Parsis arrived in the Pearl River Delta in the late 1700s and have never been known for their large numbers. Reportedly, at no point of time in their over 200-year-history have they been more than 200 in number! And, yet, it is this same little community that helped found such institutions as the Star Ferry and the Kowloon Cricket Club. Even today substantial sums of HK Dollars flow to charities in Hong Kong from Oxfam to the China Coast Community Home. Millions more go to charities abroad, particularly India. What’s important is the fact that their ‘giving’ is silent and effective.

The Parsi tradition of philanthropy in Hong Kong is as old as it is broad. It touches education, health care, sports… you name it. Late Sir Hormusjee Nowrojee Mody helped to establish the University of Hong Kong with a munificent contribution of HK $300,000. Jehangir Ruttonjee contributed HK $ 2 million to fight tuberculosis and also helped establish the Ruttonjee Sanatorium in 1949. A true memorial to this man stands in the form of the huge Ruttonjee Hospital on Queens Road in Hong Kong. The Ruttonjees also helped build Hong Kong’s first low cost housing estate at North Point.

Parsi history is also present in Duddell Street in Central. Home to Ruttonjee Centre and Dina House, the road takes its name from Duddell & Co., an early colonial firm that Dorabjee Nowrojee led. Dorabjee came to Hong Kong from Bombay to work as a cook. From this humble beginning and by dint of hard work and enterprise he owned at the end of his life, three hotels in Hong Kong. He also introduced the colony’s first steam boat ferry service – the predecessor of the Star Ferry way back in 1898.

A few years ago, while enjoying a ride on Hong Kong’s renowned Star Ferry from Central to Tsim Sha Tsui, my thoughts took me to the time when Dorabjee Nowrojee first started this service in single decked, canvas canopied, coal fired boats, to carry his workers between Hong Kong and Kowloon. Apart from being an integral part of Hong Kong’s life, the century old Star Ferry has survived two world wars, typhoons, a riot, a strike and competition from the MTR (Hong Kong’s underground metro rail system) and harbour tunnels.

Sir. Jamsetji Jejeebhoy (a partner of Jardine Matheson and Company Ltd.) was the only Parsi to serve on the board of the Hong Kong and Shanghai Banking Corporation. Sir Jamsetji however always considered India as his home and remained content trading with the China and Hong Kong.

In recent history we are witness to the munificence of Pervin and Jal Shroff to our B D Petit Parsi General Hospital. It is in all probability, the largest contribution received by any community institution in recent history. Jal Shroff incidentally is the co-founder of Fossil, an accessories company best known for its world class watches.

What makes the Parsis in Hong Kong tick? A Parsi philanthropist I met at the Parsi club in Hong Kong a few years ago put it quite modestly and poignantly, “Hong Kong has been good to us and we have prospered here. We are simply giving something back to the country that nurtured us!”