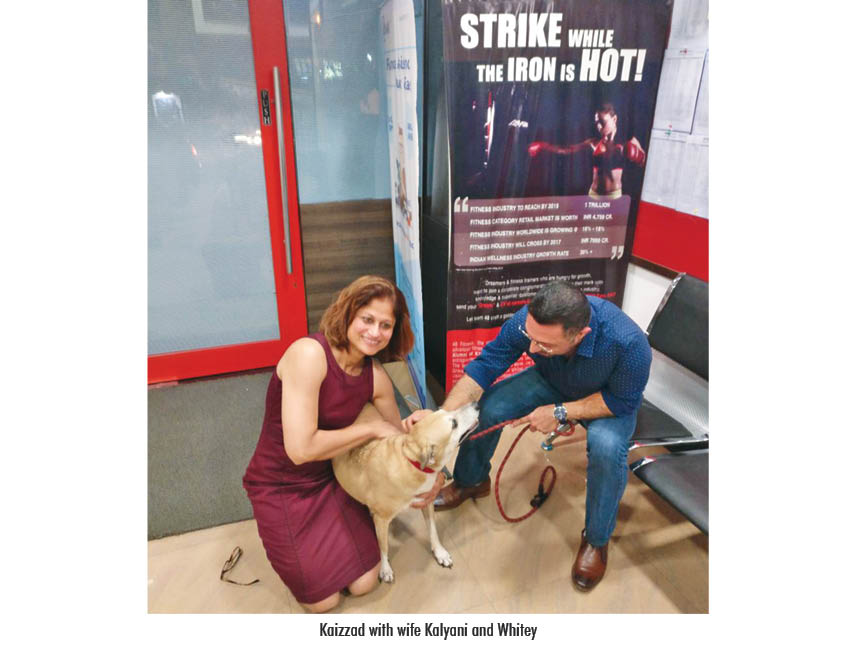 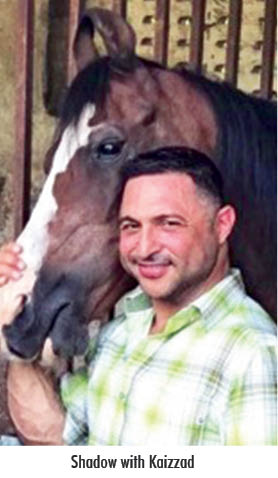 Some weeks ago, we received a mail at Parsi Times from a lovely animal and dog love, Hufrez Mistry, who sought our help in putting out an appeal to help house ‘Whitey’, a senior dog whose time at the foster-home assistance was running out and needed to be re-housed on an urgent basis. Of course, we ran the appeal a couple of times in the hope that PT would once again be the privileged facilitators to bring this appeal good results and get Whitey his forever home. But unfortunately, as is the case with housing most senior animals, ten-year-old Whitey didn’t get takers who would be able to take care of his needs as a senior dog. Time was running out with Hufrez and Parsi Times sharing an increasingly anxiety about how not to have Whitey end up on the streets, unable to defend himself and survive at his age.

We had to find some place and someone who would be Whitey’s good Samaritan and saviour, and that’s when it finally dawned – we knew of someone with a heart big enough to take in and provide loving care and dignity for senior animals, someone with a heart even bigger than his massive sinews – Kaizzad Capadia, India’s foremost fitness guru and founder of one of the India’s largest fitness organisations known for training some of the nation’s best trainers – K-11.

Kaizzad is known for his magnanimous heart when it comes to rescuing all animals and had earlier taken in the gorgeous senior horse, Shadow, housing him at his farmhouse in Karjat and catering to his every need, till he passed away in peace, amidst people who loved and cared for him. Parsi Times is privileged and delighted to inform our readers that not just Kaizzad and his equally magnanimous and talented wife, Kalyani, but the entire animal-loving K-11 family has taken in Whitey as one of their own and Whitey is now happily settled in his new forever home, along with a couple of other equally blessed canine pals!

Since no good turn should go unnoticed, we decided to bring you a one-on-one with the fabulous Kaizzad Capadia, in the hope that it would encourage and inspire our readers into following in his footsteps and fill us with a sense of pride to see one of our Community greats set the precedent of what can only be termed as the original essence of ‘Parsipanu’.

PT: Tell us about your passion for animals and your noble act of taking in senior animals.

Kaizzad: Having an animal share his or her life with you is an extremely pleasurable experience. Hence I do not consider it to be a ‘noble deed’. Caring for an animal and nurturing it back to its physical and mental strength, vigour and vitality rewards us manifold with the kind of gratitude they show us, which is truly unseen amongst humans. No matter how much love you give an animal, the love one receives in return from the animal is a 100-fold more… so, I believe in all honesty that I have done whatever it is with no other intention but to gain the superlative feeling of unconditional love and loyalty that only the incorruptible heart of an animal can provide.
PT: How did it all begin? Can you share the story of the lovely Shadow?

Kaizzad: It’s quite surprising actually to note that due to my mother’s phobia (irrational fear) of animals, I grew up in a wonderful home full of love and affection, but sans animals… I was actually introduced to animals and living with animals by my wife Kalyani who is quite literally LOVED by all animals! I saw an incredible connect that animals shared with her and that was quite something to see and definitely one of the things that increased my love, respect and attraction towards her. Once we got married, acquiring pets was something like a bucket list for me to get for my wife because of the immense happiness that she experienced in their company. So it started off as something I wanted to enrich her life with and that’s when I found that animals gave me immense joy as well!

We already had 2 Persian Cats, 2 MixBreed Indian dogs (hate calling them stray or pariahs); now I wished to get her a horse and so we adopted a baby female horse that we lovingly named Bella – a loving playful babe that enjoyed the company of many horses earlier on a farm. Our plan was to take her to our farm where we would build her a stable. But we felt that she would really get depressed staying all alone – we needed a companion for her. At that time, I was advised to take in an older, senior male horse who was a Gelding (Testicles removed) to become the perfect companion for Bella – a kind of on older brother. And in came Shadow… a strikingly beautiful and handsome 23-year-old with the attitude of a 12 year old stallion!  We nicknamed him ‘OleGangsta’. I still distinctly remember the instant connect the very first time I met Shadow. I literally felt I had found a brother. He was my Mustang. Shadow has been a show horse, was known amongst the Horsemen in the stables as the Horse with the swag – tough bugger! Then once past his prime; he even went through the tortures of being a broken Matheran Horse, he changed hands with many owners before fate planned his last year with me. Whatever I did to save him from that horrible Equine Herpes Virus was for nothing else but the desire to have him with me for at least the next 20 years. With the superlative nutrition I was providing him, I had no doubt that Shadow would simply grow stronger over the next decade… but the dreaded virus claimed him. I had him for a year and he enriched my life forever. Shadow is my constant reminder to not give up on my pursuit of physical strength and muscular development just because of some stupid injuries sustained while engaging in my other love of Biking… Shadow has become in my head the definition of STRENGTH.

Kaizzad: I’d say, don’t force yourself or be pressured into keeping animals like you are doing them a favor. Take in a pet if they give you tremendous joy – let it happen to you. More importantly, remember that pets are living beings and we have to be responsible for their well-being and happiness – we need to understand their physiological needs and their native food – please don’t impose your preferences in food on your pet. Be a Vegan by all means if you so choose to – but making your pet dog (who is a domesticated carnivore) go Vegan is abuse and animal cruelty, so opting for a herbivore pet is preferable.