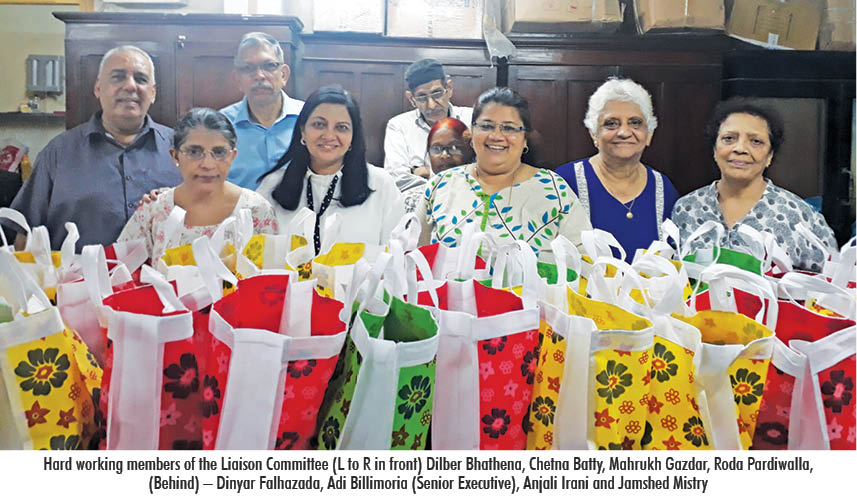 in the BPP, with Parsi Times’ Exclusive Column – BPP Connect.

THE TRUTH ABOUT WASTE MANAGEMENT

The brief facts are as follows:

The BMC last September 2017 announced that it would not collect wet waste from large Housing complexes (more than 200 flats) from December 2017. The Housing complexes would have to manage the disposal of their own wet waste. 10 of our big colonies were affected by this BMC ordinance.

It was my colleague Trustee Kersi Randeria who took a personal interest and spearheaded the onerous task of finding a solution to manage the disposal of wet waste keeping in mind the Zoroastrian philosophy of not polluting the earth and the air. Visits to all the big 10 colonies to identify locations within the colonies to set up individual composting units led to the realization that maybe a centralized Waste Management Plant was the best solution to this herculean task of managing tons of wet garbage generated by our big 10 Baugs. The place identified to set up a Centralised Waste Management Plant was Ambavadi. It needs to be stressed that it was a unanimous decision of the Board to set up a centralised plant at Ambawadi.

My colleague Trustees Kersi Randeria and Viraf Mehta and the Waste Management team held meetings in all 10 baugs where they spoke in detail about the centralized plant at Ambawadi. However there was considerable disenchantment in the community about Ambavadi being used, as it was felt that Ambavadi being technically a part of Doongerwadi, “dumping waste” would be a sacrilege. And some Trustees tried to politicize the issue and gain political brownie points, even though the decision to have the Plant at Ambavadi was agreed upon by all the Trustees.

In a subsequent Board meeting there was a discussion about issuing a clarification in the press about Ambawadi being a unanimous Board decision, however one Trustee refused to have the Board issue this public statement. At this point my colleague Kersi Randeria, who has invested his time, his energy and his heart in this project, informed the Board that he was not willing to put in so much work for a solution (which was self sustaining and put into practice our religious beliefs) if a colleague Trustee was only interested in scoring political brownie points.

At that very Board meeting it was decided to set up individual Baug wise composting units. This was in early February. Meanwhile the BMC was threatening us with Notices of penalty for Non Compliance and reluctantly extended the deadline to 1st April, from which date the BMC would not collect wet waste from our Baugs. The Trustee who took on the responsibility of setting up individual units in the 10 Baugs could not deliver and therefore due to lack of time it was decided that we route our waste through a BMC contractor. The Board agreed to pay the vendor Rs 200 per month per house to collect our wet garbage and “dispose” it. We were forced to take this ‘Stop gap” option as the BMC was refusing to give us further time to explore any other viable option. The lack of time also did not allow us to discuss this with the Colony Associations.

It is inevitable that this cost of Rs. 200/- per month for each household would have to be recovered from the occupants. However, all those who have been granted waiver / subsidy of the earlier increase of Service Charges of Rs 750/- are not required to pay this garbage disposal charge.  It is my request to each of my community members to support the BPP in bearing this cost and I am confident that in less than a year, we will find an alternative to manage the waste free of cost to the occupants. In fact, Rustom Baug Association has initiated its own garbage disposal project, so Rustom Baug residents will not have to pay the charge of Rs. 200/- p.m.

Please bear with us till then.

My Board has given 135 FREE flats in just 30 months. When I was a first-time Trustee of the last Board under Dinshaw Mehta’s Chairmanship, only 75 flats were allotted in 7 years!!! To the best of my knowledge and belief, this record of allotting 135 FREE flats without addition of any new building stock has not been achieved by any previous Board.

No Unrestricted Fly Zone over Doongerwadi

The Airport Authority of India wrote to our BPP Board requesting that we meet with them to discuss their request to lower the Limit of Flying over Doongerwadi from 10,000 ft to 3000 feet as the new Navi Mumbai Airport’s takeoff and landing pathways of the Aircrafts were tangentially touching and / or going over the Tower of Silence, Mumbai.

Meeting with representatives from the Airport Authority of India, the Collector’s office, Mumbai and the Superintendent, Survey and land records was held to discuss their request.

At this meeting a detailed PowerPoint presentation was made by them and it was emphasized by the AAI Representatives that even after consideration and due respect for the Parsi community and dignity of the dead it was not feasible for them to obviate and avoid to a certain extent flying over Tower of Silence. However, Squadron Leader Minoo Wadia, Ex Indian Air Force and Air India pilot, brilliantly explained how the flight path could easily be directed to skip flying over the Tower of Silence.

Trustee Mr. Kersi Randeria emphasized the sensitive sentiments of the Parsi Community for the Doongerwadi where the deceased were laid to rest in tranquility; open to sky and which demanded to observe dignity and respect for minuscule minority community who has given much to the Nation.

Ultimately, the Government authorities seemed amenable to the argument that the Tower of Silence remains beyond the bounds of the Navi Mumbai Airport fly pathway. The Government Authorities requested for a suitable letter from BPP on this line of discussion which has been forwarded to them. I must express appreciation of Trustee Kersi Randeria whose emotional argument seemed to have won the day for the Parsis. And of course for Squadron Leader Minoo Wadia, whose technical skills and phenomenal knowledge about International Airports’ traffic rules paved the way for seeking alternatives.

God willing there will not be any Fly Path below 10,000 feet over our Tower of Silence. And no Fly Path for any helicopters.

My enriching and successful corporate experience, spanning 34 years, has convinced me that productivity and performance increases manifold when employees are incentivized. To that objective, with the concurrence of my Co-Trustees, last year I instituted awards for various functions in the BPP. Last year the recipient of the Chairman’s Award was custodian of Contractor Baug and Khan Estate, Mahim – Neville Malegamwalla.

This year, I propose to donate Rs. 2,00,000/- for the Chairman’s Awards. Judging the performance of the staff over the past year, four BPP staff shine through –

The BPP is mainly judged by its performance in providing charity / subsidized housing to the community. In the past the bad name of the BPP can easily be attributed to a great degree to the rude, indifferent and biased conduct of the person handling this crucial function. With Ronny Patel being assigned this function under my Board, it has been a key influencing factor in pushing up the image of the BPP. Ronny is sensitive to the plight of those who come to the BPP for housing and many community members have given high praise to Ronny for his sensitivity, guidance and helpfulness in attending to them. Ronny has succeeded in his function and deserves to be the recipient of the Chairman’s Award of Rs. 50,000/- for the Best Executive.

A ‘Custodian’ is the ambassador of the BPP. Companies measure their success by their “eSAT” (i.e. Employee satisfaction) and “cSAT” (i.e. Customer satisfaction) scores. For a custodian the measure of his success is the cSAT score of the residents of the colony he manages. One such custodian is Rusi Gandhi whose work has been acclaimed in writing by the residents of Godrej Baug. In my opinion Rusi has succeeded in his function and deserves to be the recipient of the Chairman’s Award of Rs. 50,000 for the Best Custodian.

Mahrukh is one of the staff of Liaison Committee. Her commitment to her duty is beyond belief. She has demonstrated her commitment and compassion when a sick, mentally disturbed colleague required help and she made herself available at all hours for her over many months. Even at 5.30 in the morning when most of us are in deep sleep, Mahrukh has willingly rushed to help. For her unstinted loyalty and compassion which is beyond her duty, Mahrukh deserves to be the recipient of the Chairman’s Award of Rs. 50,000 for the Best BPP Social Worker.

In my opinion what really counts for effectiveness is not qualifications or competence or experience but “attitude”. Mahiyar has a tremendous “attitude” – you give him any assignment under the most difficult circumstances and he gets it done. He is a clear selection for the Chairman’s Award of Rs. 50,000 for an Exemplary Employee.

What makes this distribution different and unique is the care and thought that is put into making the hamper – apart from the regular rice, dal, tea, sugar (2 kg Kohinoor Basmati rice and Tata tea), the families get Mangal ravo packet, Royal falooda packet, Elephant brand sev, 150 gms mixed dry fruits, 200 gm Amul cheese block, 200 gms Wafer packet, barik salli, poha, moong dal, upma and to top it all a plum cake from Merwans – all to make their Navroze a sweet and  enjoyable  occasion.

Also the persons who come to collect the hampers are treated with respect and dignity and given juice packets while standing in the distribution line.