Deepak Hooda’s magnificent batting effort of 32 in 25 balls coupled with a power packed bowling performance from Rashid Khan (1-13), Sandeep Sharma (2-25) and Siddharth Kaul (2-29) helped Sunrisers Hyderabad win an exciting last ball finish by one wicket against Mumbai Indians. Batting first, Mumbai posted 147-8 in their 20 overs as Evin Lewis top scored with 29 while Suryakumar Yadav and Kieron Pollard contributed 28 each. In reply, SRH got off to a good start as openers Wriddhiman Saha and Shikhar Dhawan made 22 and 45 respectively. Hooda played a responsible innings towards the latter end of the contest as SRH were reeling at 136-7 in 17.5 overs. Needing just one run of the last ball and with only one wicket in hand, Billy Stanlake struck the ball for a boundary. Jasprit Bumrah was awarded the perfect catch of the match, Evin Lewis took home the super striker award while the stylish player of the match went to Mayank Markande for his (4-23). The nai soch award was given to Rohit Sharma while Rashid Khan grabbed the Man of the Match.

Wrestler Sushil Kumar gave India yet another gold medal as he registered a 10-0 victory over Johannes Botha of South Africa during the men’s freestyle 74 kg final, during the Commonwealth Games in Gold Coast. On the other hand another wrestler Rahul Balasaheb Aware defeated Canada’s Steven Takahashi in the men’s freestyle 57 kg wrestling final event to clinch gold. Shooter Tejaswini Sawant won a silver in the 50mts rifle prone final event as she gained a cumulative score of 618.9 over six series in the final. Babita Kumari also finished off with a silver as she was beaten by Canada’s Diana Weicker in the 53 kg women’s freestyle Nordic final bout. 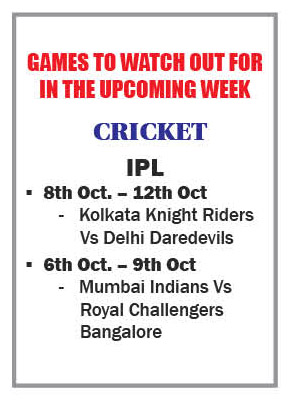