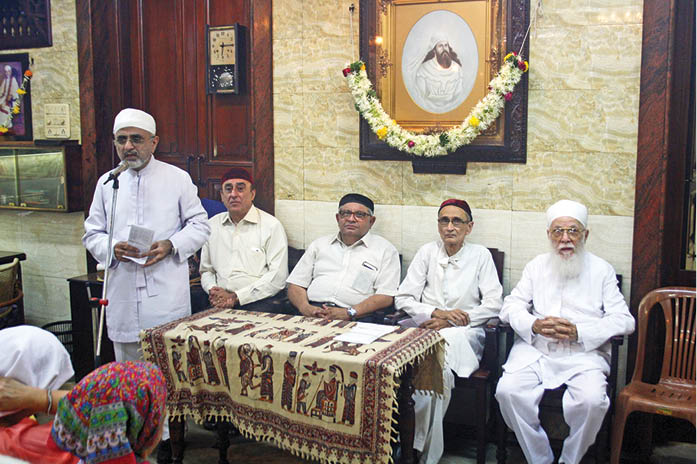 The Seth BM Mevawala Agiary at Byculla celebrated its 144th Salgreh on 30th April, 2018, with a Maachi offered in the Havan Geh, followed by a jasan performed by the Panthaky Er. Parvez Bajan along with other Mobeds, on behalf of the Trustees at 9:00 am. The evening function commenced with a Jasan led by Er. Darayus Bajan, on behalf of the well-wishers and residents of Byculla at 5:00 pm, followed by a celebratory function chaired by Senior Trustee, Dr. Aspi Mehta, and Chief Guest for the day,  Panthaky of Vatcha Gandhi Agiary, Ervad Asphandiar Dadachanji.

Dr. Aspi Mehta introduced the Chief Guest and the other Trustees, followed by Er. Parvez Bajan elucidating on the history of the Dar-E-Meher, mentioning that in the 19th Century many of the present Agiaries and Dadgahs were established to re-affirm the faith of the community in the Zoroastrian religion, in lieu of the communal clashes in the city of Mumbai and therefore the culture of colonies and baugs were introduced for the members of the Parsi community.

Thereafter, Ervad Asphandiar Dadachanji gave a brief history of the establishment of various grades of fire and called upon every member of the community to pay respect and homage to the Atash by frequently visiting the Agiary and Atash Behrams. The evening also witnessed singing of monajats by the senior citizens from Rustom Baug and also Navaz, Varzavand, Jamshed Kotwal and Marzban Wadia. Jiyo Parsi’s Pearl Mistry enlightened the gathering about this initiative by the Government and highlighted the various schemes under the project. The function concluded with the felicitation and vote of thanks by Er. Parvez and Er. Darayus Bajan. On this occasion, new Trustees, Vispi Mistry and Filly Karkaria were introduced and felicitated. Er. Bajan thanked all the Trustees for their continuous support, Mobeds and Staff of the Agiary, as well as Parsi Times and other media for the whole hearted support and coverage of the events.

The function ended with the reiteration of Chhaye Hame Zarthoshti, followed by distribution of chasni and refreshments.