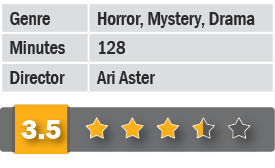 “She wasn’t altogether there at the end,” says Annie Graham (Toni Collette) of her mother, Ellen, while delivering her eulogy. She also describes the departed woman, with whom Annie had a none-too-warm relationship, as ‘secretive’ and ‘private’. Among those attending the funeral are her husband Steve (Gabriel Byrne), teenaged son Peter (Alex Wolff) and daughter Charlie (Milly Shapiro). Soon after the burial, Steve receives a call that the body has been desecrated, a fact he keeps hidden from his wife. A few cryptic secrets are unravelled by the quartet and strange – and needless to say – gruesome goings-on result. One of the more innocuous, and yet spooky sounds in the film is that of the 13-year-old Charlie’s clucking: the viewer learns to expect more than something sinister thereafter.

The film opens, and closes, with a long shot of a treehouse which morphs into miniature houses and models that Annie the artist constructs and paints. Though the film opens on a sedate note, first-time feature director Ari Aster, having directed six shorts before this, seems to have the pulse of the viewer (literally so!) within a half-hour of the movie. When Annie is heard speaking her mind at a grief counselling meeting, the family is projected as dysfunctional, with only Steve having a semblance of being normal. The director ups the ante when Joan (Ann Dowd) enters the scene, urging Annie to attend seances which the latter then attempts to perform at home with husband and son. With depictions amidst scriptures from an unknown language, the film seems to supply the ‘X’planation towards the end.

Even at two hours plus, Hereditary is a compact film with elements from the supernatural linking the drama and horror genres. Debutante Mily Shapiro is superb and even Wolff, with a few dialogues, excels. But the film belongs to the Australian Oscar-nominated Toni Colette, who almost carries off the film single-handedly. And with excellent support from cinematographer Pawel Pogorzelski and Colin Stetson’s music score, writer-director Aster’s debut film seems set to be the horror film of the year.