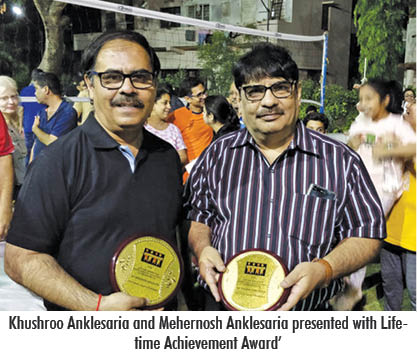 The Parsee Youth League of Ahmedabad (PYLA) hosted the seventh edition of its annual Floodlit Night Volleyball Tournament, the ‘Jimmy Muglai Volleyball Cup’ (named in memory of the late Jimmy who was a keen sportsman), on 21st April, 2018, at the Parsi Sanatorium grounds, Ahmedabad. The tournament was played between 6 teams, divided into two groups of three teams each. With each team playing a best of three sets, the top two teams of each group advanced to the semi-finals. Team ‘Super Six’ topped Group A by defeating ‘Legends 1’, while ‘Khamasa’ topped Group B against ‘Legends 2’. ‘Super Six’ won the first set, while the second was won by Khamasa. Shezad Babycon of team ‘Khamasa’ won ‘Best Player’, while Kayan Dotiwala from ‘Young Guns’ was adjudged the ‘Most Promising Youngster’. ‘Super Six’ were presented the Jimmy Muglai trophy by Freddy Muglai, son of late Jimmy Muglai. PYLA honored Khushroo Anklesaria and Mehernosh Anklesaria with the ‘Lifetime Achievement’ award for their achievements in volleyball. With over a 100 people cheering the participants late into the night, the event was a huge success.