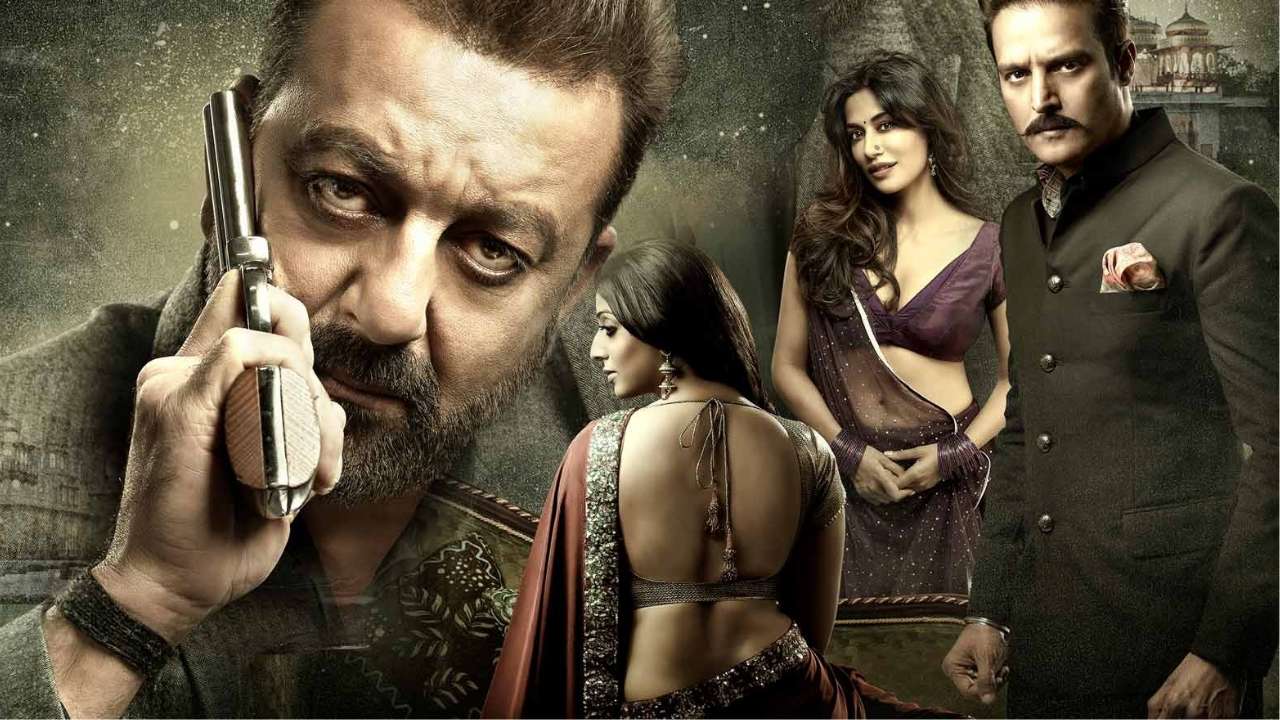 It took almost a half century to metamorphose Guru Dutt’s iconic title (thankfully not the film) ‘Sahib, Bibi aur Ghulam’ 1962 to ‘Saheb, Biwi  aur Gangster’ in 2011. A sequel ‘SBG Returns’ followed a couple of years later.
The more-than-moderate success of the two would have buoyed the writers Sanjay Chouhan and Tigmanshu Dhulia into penning a third in the series. While Saheb and Biwi remain the same (Jimmy Sheirgill and Mahie Gill), the gangster has varied. Randeep Good and made way for Irrfan Khan in 2013. Sanjay Dutt takes up the mantle in this latest —  and not necessarily with the desired effect.
Aditya Pratap Singh (Saheb) of Devgarh is incarcerated in jail for murder. His scheming wife Maadhvi Devi (Mahie Gill) enjoys the privileges in his absence. Besides holding durbars in the palace, her MP status gives her almost limitless powers.
Another power family with dwindling fortunes after the Maharajas’ Privy Purses were abolished (the viewer is reminded on more than one occasion) reside in neighbouring UP. Maharaja Hari Singh (Kabir Bedi) and younger brother Vijay (Deepak Tijori) are forced to convert, for financial reasons, part of their palace into a hotel. Scion Uday Pratap Singh, makes a living out of Russian Roulette in London, operating a fancy hotel called House of Lords while his mistress Suhani (Chitraganda Singh) yearns for him.
Dhulia spends most of the first half introducing his characters and establishing the premise for the second half. Deceit, back-stabbing and power games form the backdrop in almost every scene of the film.
The writing seems to be half-baked. Too many characters and sub-plots neutralise the performances of the two key actors — Jimmy Sheirgill and Mahie Gill. Sanjay Dutt seems to be uncertain as to whether the gangster or nawab should take precedence. Soha Ali Khan, as Aditya’s second wife Ranjana, fails to impress in the couple of scenes that she has while Chitraganda Singh looks ravishing, as is her task in the film.
The more promising scenes in the film are those between Aditya and Majuro, while the best dialogues are written for the scenes between Aditya and Uditya. Pamela Bhutoria as Uday’s techno-savvy confidant impresses.
The music too is forgettable — depending on the original version of Lata’s ‘Lag ja gale’ and a remixed one takes the film nowhere.
There are a couple of technical glitches and goofs too. A half hour into the film, when Maadhvi Devi is travelling with the DIG in the car supposedly in Rajasthan, pay attention to the rear windshield. An Ash Farohar sticker suggests that the car was a rented one with the shooting not in Rajasthan as shown.
The ending, though not arbitrary, is suggestive of a fourth instalment.