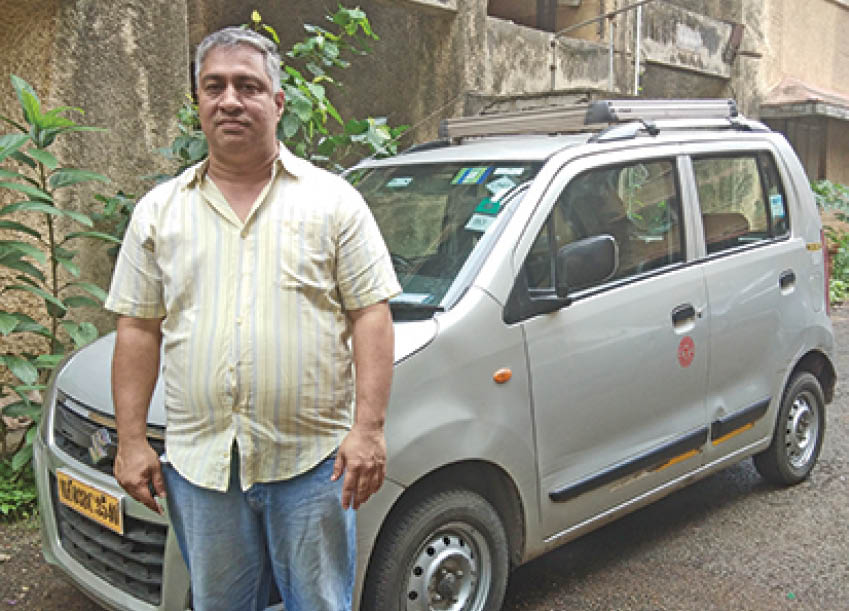 On 23rd July, 2018, at around 11:15 pm, 46-year-old, Sharukh Engineer, resident of Bharucha Baug and a registered Uber driver, was assaulted with an iron rod by an accomplice of the lady commuter who boarded his cab, at Antop Hill, with Kalina entered as the destination. Having completed his daily quota, Sharukh decided to retire for the day and logged in his home destination on the Uber application from his phone at around 10:55 pm. Currently located at Antop Hill, Sharukh accepted the ride registered under the name of ‘Rakesh Thalakkat’ to Kalina – a destination that was en route his journey home. However, at 11:10 pm, a lady boarded his Wagon R, and inquired about the destination that was punched in. On learning about Kalina as the ‘drop’ destination, she refused saying she needed to be dropped to Dombivali. Sharukh immediately refused stating that he had accepted the ride based on the fact that it was a journey on his way home, and requested her to cancel the ride, and said he would wait till he had safely secured another Uber ride or transportation for her to her preferred destination. However, the girl immediately alighted from the car and walked over to her friend, Rakesh who had booked the ride.

“They both whispered something, after which he came over to my window and insisted that I drop her off to Dombivali. I explained to him that since I had a hectic schedule the following day, I cannot afford to go the opposite direction, only to have an empty ride back home.” The conversation soon turned into a heated argument, causing Sharukh to step out of the car. “Rakesh soon turned violent, pulling at and tearing my shirt in the process. I immediately pushed him away. He walked over to his car and returned with an iron road and assaulted me with it on my head.” The impact from the two-and-a-half feet long iron road injured Sharukh gravely with a deep gash on the left side of his head, just above the ear, as he started bleeding heavily.

On noticing blood ooze out, Sharukh proceeded to note down the number of Rakesh’s vehicle, to which another man stepped forward and slapped Sharukh twice. Sensing the gravity of the situation and his own injury, Sharukh hurried home, compressing his wound with one hand and driving with the other. Sharukh’s wife, Silloo along with her brother, Rustom soon rushed him to Kokilaben Dhirubhai Ambani Hospital, Andheri, and were quickly joined by Sharukh’s brother, Viraf. “I chose to drive home and not to the hospital directly as I was worried I would faint,” says Sharukh, who was assisted effectively by Dr. Shah and his team, immediately on arrival. Sharukh underwent surgery at 3:00 am on 24th July, and received 10 stitches to suture the gash.

On being discharged from the hospital, Sharukh, along with Rustom and Viraf approached the Wadala Police Station (Truck Terminal) to lodge a complaint. But since the location of the crime was  Antop Hill, Sharukh was escorted with two constables to the Antop Hill police station where he lodged an at 3:25 am. “We did not sleep the whole night. We returned home from the police station only at 7:00 am the next day,” said Sharukh. Acting promptly on the complaint, the police arrested Rakesh on 24th evening. However, on inquiring about the other violator who slapped Sharukh, Rakesh refuted all claims of having any relation with that man. Speaking to Parsi Times’ Asst. Editor Delaveen Tarapore, Investigating Officer, Police Sub Inspector Y P Sanap said, “A case was registered with us on the 24th and we arrested the accused on the same day itself. We have even recovered the weapon of assault. The lady commuter turned witnessed and accepted that a brawl took place which resulted in the assault. We are currently doing our best and investigating the case further.” Rakesh was remanded in police custody for two days and was produced in Kurla court on the 26th July, 2018.  Currently, the court has remanded Rakesh in custody.

“I would like to thank all my Parsi brethren who have supported me throughout. My wife and my family sincerely thank our whole community for providing us with physical and moral support, which is giving me the strength to face the situation,” said Sharukh. “After this episode, I would request each and every one of us to control our temper and deal with every situation calmly, especially on the roads, because back home, we all have our loved ones waiting for us,” concludes Sharukh exhibiting exemplary grace under pressure!