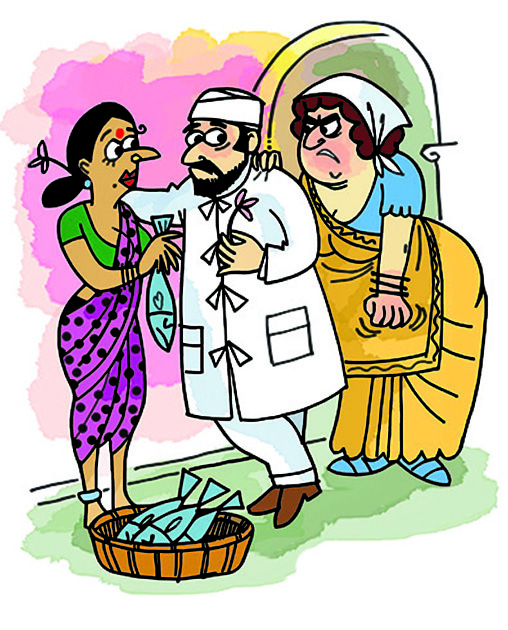 It happened one day, the time I was trying to eke out a satisfactory living, satisfactory to my wife, struggling times for me. I had to meet a CEO of a foreign company. I had fixed up an appointment with his secretary for 9:30 am. At 9:25am, I entered her office. The secretary, unused to Parsi surnames just introduced me to him with, “this gentleman has come to see you sir, regarding such and such a matter.” The man looked me up and quipped “You must be a Parsi.” I had often been accused of being many things in the past, a Sindhi perhaps, a Catholic maybe, but a Bawaji, no, never! So I asked him how he guessed my being a Bawa. He replied, “You are right on time and your shoes are polished.”

I wish my wife had been there to hear this. She had christened me ‘sloppy’ just because I was late for our wedding by a couple of hours… and had since not done much to improve my image. The dasturji had almost given up all the hopes of doing his worst, hurling fists-full of rice and other stuff in the name of ashirwad and then collecting a fat envelope at the end of this performance. It really wasn’t my fault – my darji’s mother-in-law decided to have a heart attack the previous day and my shirt and trousers were delivered just an hour before the appointed time of execution. Maybe I was a bit late, but what the hell, that does not make me unpunctual or sloppy. Bu then, our honeymoon at Sumari Gaam, near Surat, was the last straw. She wanted to go to Switzerland

Maybe I also let myself go a bit seedy when I come home after a hard days toil and after changing into my cavernous PJs and equally baggy, long sadra, I plonk myself into my grandpa’s easy-chair with a glass of refreshing nectar with some rocks tinkling a counterpoint to Rimsky-Korsakov’s Scheherazade or Tchaikovsky’s Swan Lake, and waving hands in the air like apro Zubin Mehta. Aaaaaaaaaah, c’est la vie. But no, my battle..err … better-half thinks c’est is not la vie! She likes to watch some clownish character in slap-stick comedy make an ass of himself loud and clear, and all the while, complaining about my masterpieces, “mare-re, aie su kai pee-pu pee-pu karech! Saaru che pelo pav roti nahi aaje vagaarto. Tae bi Italian ma gai, Besi-ne muko ne Mala gaina.” I have often to tell her, “Don’t be gross. These songs are eternal numbers. Besame Mucho and Malaguena, ne singer nu maam che Pavaroti.”

Cut to morning as a film director would say explaining his story to a producer. Scrubbed and tubbed, kusti worn, prayers said, I call sweetly to the one I have taken for better or worse saying, “Raty darling, my breakfast. Is it ready?” “Ha Darabsha, ha!” The only thing you are punctual for is breakfast. Lunch, dinner and bapore ni chai too!” Punctual, on the dot. I squeezed in my two bit worth, “Darling, gai kale bhi to ketla late jamiya. It was past 11p.m. Did I say anything?” said I. Ratamae riposted with a touch of sarcasm, “Darab that was because you were on line with your editor getting verbal lashing for your inane article, which she said was totally devoid of even a gram of sense and that too late as usual. I also distinctly heard her saying, “As always tardy, always sloppy, Darabsha!”

And as I was about to step out there came the reminder “Darabsha, aaje evening me mara bhai ne tah dinner per javanuch. (That brother of hers who always gulps down my single-malt and serves only cheap whiskey at his place) Bhulta na! Be on time!! Mari French ni professor kehti thi, Le punctual roy ……” I finally had the chance to put her in her place. I said “Don’t #@$* that lovely language. It is ‘la ponctualité est la politesse des rois. i.e. Punctuality is the politeness of the kings’. But I am sorry, I will be late. I have late meeting with my editor to discuss some important issues for the Navroz issue. Au revoir!

11 August 2018 Issue, frontpageslider, paowalla, Parsi New Year, Perks and quirks of a parsi housewife, Proud to be a bawa

Liked it a lot. Very entertaining and typical Parsi. Do keep writing in this humerous vein.