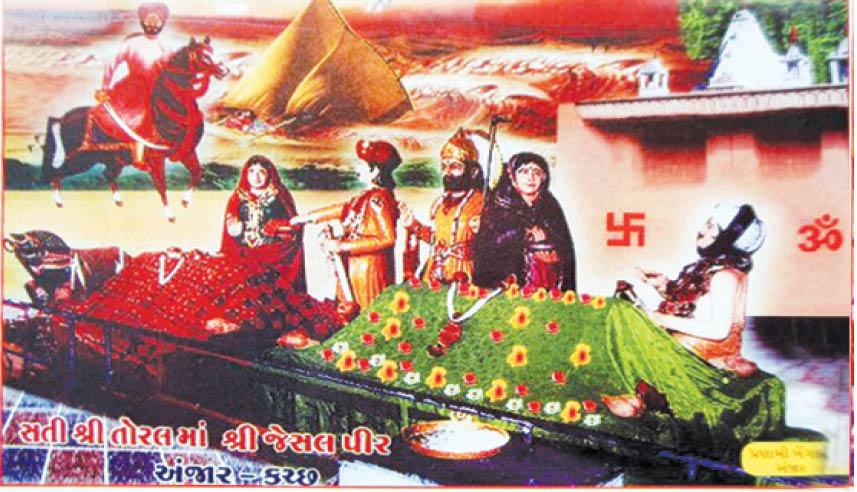 The legend of Jesal-Toral is famous in most parts of Gujarat, particularly in Saurashtra. It is the story of Toral, the saint-poetess who transformed a dreaded dacoit into a saint.

It was a reign of terror in Kutch for several years during the 14th century, thanks to a dacoit called Jesal, who unleashed untold cruelty and violence on all sentient beings. One night, Jesal went to steal a priceless mare from the stables of Seth Sanstiyalji in Saladi village. The Sethji’s beautiful wife Toral caught him in the act and reprimanded him saying, “Stop! You thief”.

Jesal was mesmerised by her exquisite beauty but he had already known that Toral, though leading a wordly life, had detached herself from this physical world, praying and singing the Lord’s name in a metaphysical world of her own. She decided to turn the dacoit into a pious man, convincing him through her poetry and songs that his chosen path in life was wrong. He promised to become her devotee if she agreed to take him on a pilgrimage. To save his ‘soul’, she agreed and on their journey, while crossing the sea by boat, they were trapped in a terrible storm wherein the wind howled like a demented person and the waves threatened to devour their boat. The ferocious dacoit was scared to death and turned whiter than the white clothes he was wearing!

And Toral? In the midst of the storm, she was calmness personified! She composed poems and sang songs on the meaning of life, the creation of the universe and her intense love of God. These songs completely changed Jesal. There was a metamorphosis in his life within those few hours amidst the deadly storm, falling madly in love with Toral’s beautiful soul, just as he had fallen for her physical beauty in the stable.

Jesal and Toral held a dialogue on various spiritual topics now that Jesal had given up his sinful ways and entered a new, austere and pious life. Toral’s songs during the storm as well as her spiritual dialogue with Jesal are still sung today as devotional bhajans in Kutch, and parts of Gujarat and Rajasthan.

Jesal and Toral spent a saintly life at Anjar, dedicating themselves to the service of the poor, unfortunate people, spreading spiritual knowledge, praying, meditating and just being with each other since by now, their love required no verbal communication, Jesal was Toral’s dedicated devotee, her comrade and soul-mate.

When Jesal died, Toral couldn’t bear to live without him. She took samadhi (conscious death which was taken by the rishis and munis of yore!) The tombs of Jesal and Toral are situated side by side, close to each other in the town of Anjar (near Kandla port) in Kutch. It is believed that the tombs are moving closer to each other by a mere fraction of a centimetre every year. Legend also has it that when the two tombs meet and touch each other, it will be the end of world. Meanwhile the tombs stand as silent testimony to the fact that a woman’s love and courage transformed a dreaded dacoit into a saint!