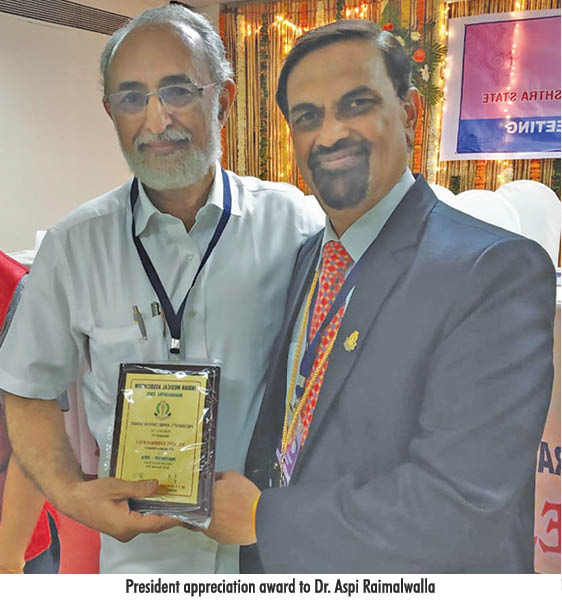 In a glittering event that was held at the at the Trident Hotel on 24th November, 2018, the Indian Medical Association (IMA) of Maharashtra appointed Dr. Hozie Kapadia as the Maharashtra State President. With this esteemed honor, Dr. Hozie Kapadia, adds a prestigious feather to the Parsi cap, becoming the first ever Parsi to be made the President of the renowned IMA of Maharashtra, which is the largest state medical association in the country, with over 43,000 registered members. The initiation ceremony was part of MASCOM, a 3-day Medical conference held at the Trident. Stalwarts including Padma Bhushan Dr. Tehemnton Udwadia and Padma Shri Dr. Soonavala were also part of this three-day conference.

Dr. Kapadia was initiated as the President with a drum salute and the State President Medallion by the National President, Dr. Ravindra Wankhedkar, who praised Dr. Kapadia as “resourceful, creative and dynamic, and a true gentleman, a rare kind in this day and age.” Next, the newly elected President Dr. Kapadia shared his vision for IMA – to foster an environment where doctors are respected, and consulted before important government decisions are taken and how doctors need to be more compassionate towards the needs of the patient. He also spoke about various legislations which need to be passed to allow the medical fraternity to flourish. His colleagues commended him for all his efforts in ensuring that the draconian sections of the National Medical Commission Bill were not passed; and praised him for strongly opposing the sections that were anti-poor, anti-democratic and anti-federal and how he was an integral part of the team that ensured that it didn’t get passed.

Dr. Kapadia has been practicing for over 43 years and as his supporting wife Kerbaan put it, “IMA is his passion.” He started with the grassroots movement and over four decades of dedicated service have culminated into him being the unopposed President. His colleague, Dr. Chichgur added, “He has been with the IMA for a very long time and he’s being selected as the President because of his goodwill, honesty, integrity and his dedicated service not only to the Parsis, but to humanity as a whole.” Another colleague, Dr. Aspi Raimalwala, who was also awarded earlier, said, “A sincere, deserving candidate got the post of IMA Maharashtra President.”

Speaking to Parsi Times at the initiation ceremony, Dr. Kapadia said, “I want to bring back the glory to the medical profession that doctors had in the past. The profession was untainted. I also want to ensure that the government registers everyone and lays down certain rules and regulations on how to check accreditations. IMA would need to work with the Government of Maharashtra and the secretary of health and education to ensure that only qualified professionals can practice. Other than that I want to continue helping the medical fraternity as IMA president in whatever way I can. I hope the government consults the IMA and doctors before passing any legislation relating to the medical field.”

When asked what advice would he give to aspiring Parsi doctors, he replied, “One should keep one’s self updated, be compassionate with your patients and also indulge in charity work. Money is not everything – the patient’s love and respect for you is. The patients don’t just expect medicine, they expect empathy and care and as doctors, we should be compassionate and empathetic.”