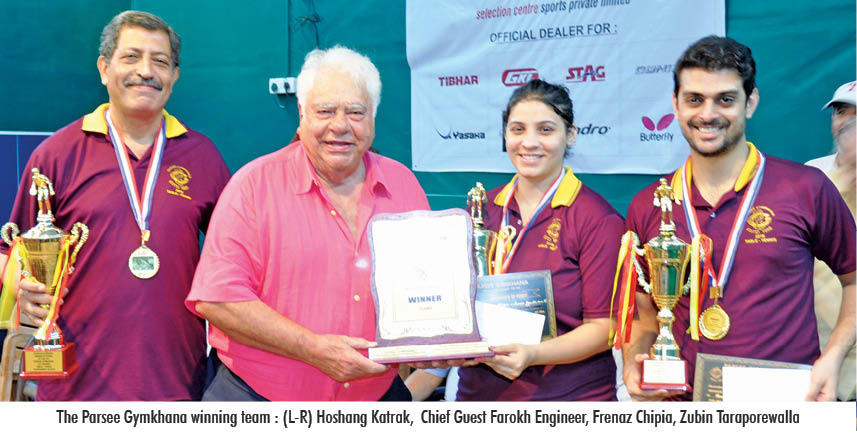 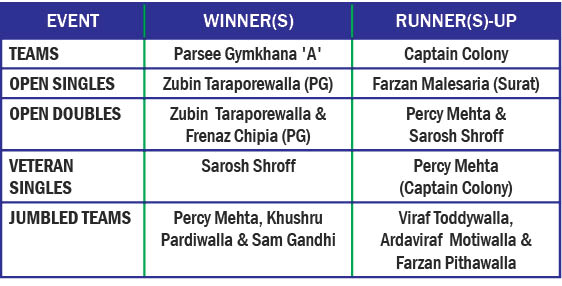 Hosts Parsee Gymkhana retained their winning streak in the 5th All-Parsee Table Tennis Tournament organised by and held at the Parsee Gymkhana on 24th and 25th November, 2018. The competition saw 77 players – from Surat, Navsari and Pune – vying across five events, with an impressive 79 matches played in just the Open Singles event. Fresh faces with talent to match – ensured that the contests were lively and evenly fought.
Intermittent back spasms caused Gujarat No.1 and Parsee Gymkhana star player, Frenaz Chipia, to withdraw from the Open Singles to concentrate on the Open Doubles and Team events. Barring 12-year-old Pearl Amalsadiwalla’s stellar performance – beating Nekzaad Kerawalla and Ushaine Gandhi on the way to the semi-finals – there were no major upsets. Sarosh Shroff beat rival Percy Mehta to bag the Veteran Singles crown. The most awaited event, Jumbled Teams, saw a majority of the matches end in nail-biting finishes, causing the first day’s play to extend till almost midnight.

Former India wicket-keeper, Farokh Engineer, who was the Chief Guest, and also the last Parsee to play for India, lamented the lack of cricketing talent within the community but hoped that the tide would turn around.