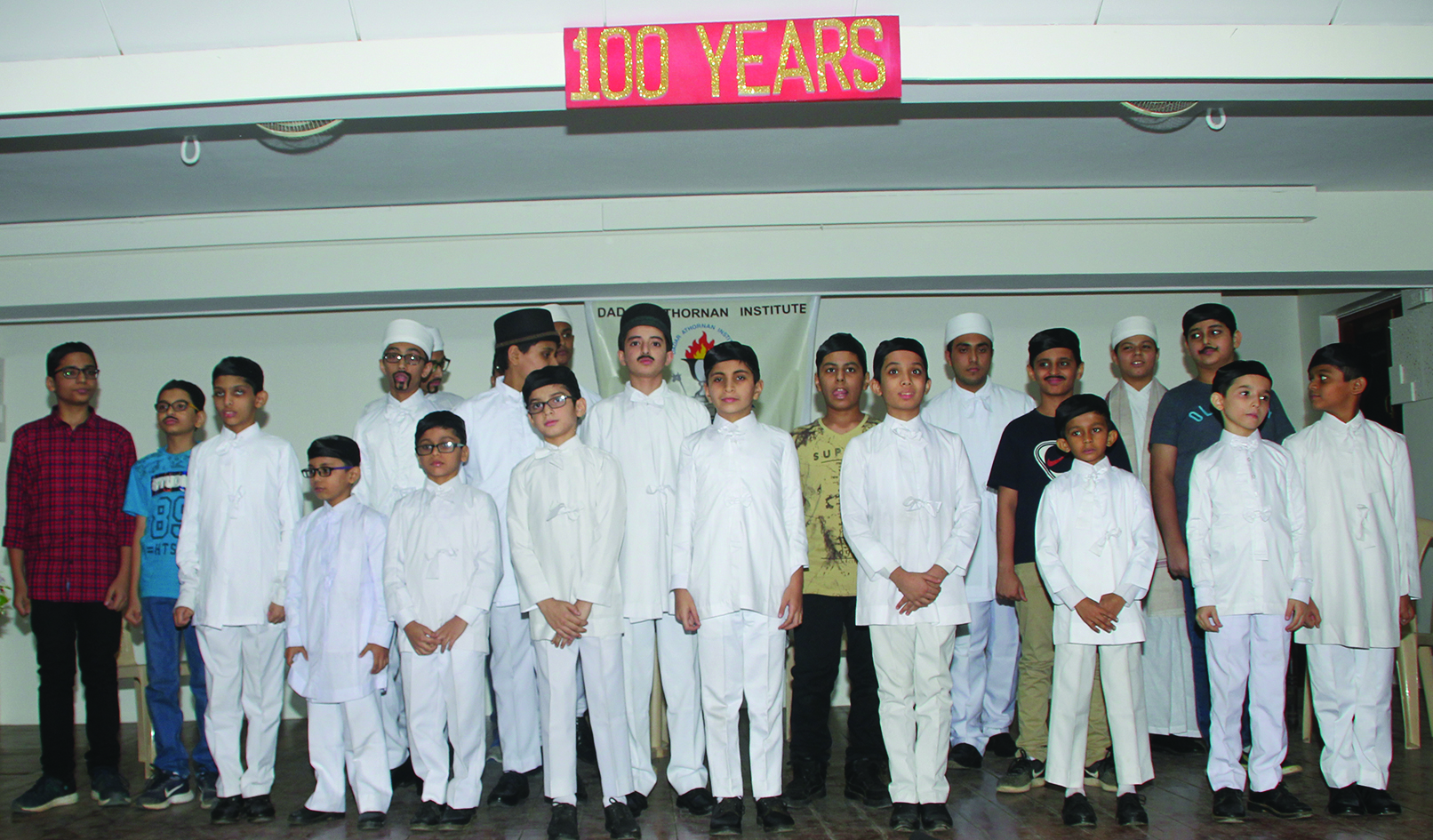 The Dadar Athornan Institute (Dadar Madressa) organised its centennial function at the Mancherji Joshi Hall of the Institute on 22nd December, 2018, with Dr. Nadir Godrej as the Chief Guest, accompanied by his wife Dr. Rati Godrej and sons Er. Burgess and Er. Hormuzd Godrej. Presided over by President of the Athornan Mandal, Vada Dasturji Khurshed Dastoor, the event commenced with a Humbandagi led by the Navars and Maratabs of the institute. Principal of the institute, Er. Dr. Ramiyar Karanjia delivered the welcome address and observed a minute’s silence in memory of late Er. Malcolm Hozdar, a student who passed away this year.

The students of the Madressa performed a monajat, followed by introduction of the Chief Guest and other dignitaries. Er. Cyrus Darbari traced the life and achievements of Vada Dasturji Khurshed, culminating with his collaboration with the Jiyo Parsi campaign ‘Empowering Mobeds’, aimed at instilling leadership within the priesthood brethren and boosting their personality to interact better with the laity. Head Boy of the DPYA High School, Er. Amavand Panthaky felicitated Vada Dasturji Khurshed and reminisced the tutelage and guidance of Ex-Principal late Er. Rustomjee Panthaky, who gave 40 Yozdathregar priests to the community and realized his vision of establishing the Mancherji Joshi Hall, a Library and Residential Quarters for staff as an annexe to the Madressa, in addition to convincing the D.P.Y.A. High School to impart free education to the Madressa students.

Crediting Binaifer Sahukar for her suggestion to conceptualise ‘Empowering Mobeds’ campaign which trains Mobeds to face challenges, Vada Dasturji Khurshed further released the new brochure of the Madressa containing all the achievements and activities of the Institute. Er. Cyrus Darbari introduced Dr. Nadir Godrej and mentioned his achievements including receiving an Honorary Doctorate of Philosophy from Manav Rachna University. Er. Dr. Ramiyar Karanjia announced the highlights of the report about the activities and achievements of the Madressa in 2017-2018.

The ‘Rustom Panthaky Ex- Student Award’ was awarded to Er. Marzee Maidhyomah Kerawala, who apart from being a financial advisor, is a Mobed at the Rustom Faramna Agiary during the Muktad period. An outstanding student of the Institute, he is known for his charitable work. The event also witnessed the release of the Madressa magazine, headed by Er. Cyrus Sidhva, ‘Knowledgiate’, which is an engrossing compendium of articles from diverse fields, in stories, poems, puzzles, personality development and much more. Er. Sidhva further announced twenty prize winners who excelled in academia, sports, co-curricular activities and prayers and were felicitatedby Dr. Rati Godrej.

Dr. Nadir Godrej delivered a wonderful poetic description of the history of our religion, praising the progress of the Madressa which continues to provide a holistic education and produces renowned erudite priests. Dr. Rati Godrej then elucidated the importance of priests and emphasized on the importance of being grateful to these spiritual leaders. The event concluded with a wonderful skit by the students, followed by a vote of thanks by Er. Vispi Dastur and refreshments.