Recognising three aspects for the future of our community – a proud past, a progressive present and a promising future, the Navsari Local Committee of The WZO Trust Funds organised a function at Sirvai Party Plot, Bai Dosibai Kotwal Parsi Orphanage on 20th January, 2019, which included the felicitation of our Mobeds, the 16th Annual Prize Distribution and releasing the updated Directory of Parsis in Navsari.

Dinshaw Tamboly, Chairman of The WZO Trust Funds welcomed Chief Guests Er. Aspandiar Dadachanji, Vada Dasturji Kekhashroo N Dastoor Meherjirana and Er. Khurshed Homi Desai as well as parents, students, Prof. Almut Hintze, Binaifer and Karl Sahukar from Mumbai for their active role in community affairs with warm words. After felicitating the Chief Guests, Tamboly emphasized that no community could survive without a strong religious foundation, and at the same no religion can survive without an enlightened clergy. He extolled the contribution and involvement of our Mobeds and their role and responsibilities they uphold for our Community and was glad to announce how WZO Trusts local Committee had taken the lead in acknowledging and felicitating our Mobeds. He informed of the assistance given to priests via ‘The Global Working Group’ and other efforts for ensuring the sustenance of the priestly community. the Chief Guests felicitated 35 mobeds of the community, comprising 19 full-time Mobeds with 6 of them practicing for over 25 years; 14 Mobeds practising part-time; and 3 youngsters who have recently begun to perform Mobedi in addition to pursuing their studies. 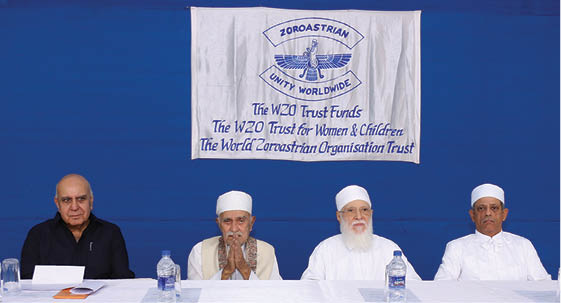 The event witnessed the launch of ‘The Directory of Parsi Zoroastrians of Navsari’, unveiled by the Chief Guests along with Dinshaw Tamboly and working committee members Marazban Gyara, Aspi Ambapardiwala and Cyrus Vandriwala. The Local Committee of WZO Trusts at Navsari were appreciated for putting together this comprehensive 2014-paged Directory, containing relevant details that runs into 204 pages. As the previous such directory was printed over four decades ago, in 1974, the new and updated one would definitely prove helpful to all Zarthostis and is available for. Author and historian, Maherazban Gyara was also thanked and felicitated.

The WZO Trusts local Committee has been organising Prize Distribution Programme since 15 years to felicitate students from Nursery class to Post Graduates. A total of 237 students received gifts of which 126 were toppers were felicitated with cash prize by dignities on dais and Dinshaw Tamboly. Toppers included Jenifer Gabla awarded a Ph. D.; Zeaan Pithawalla securing 92.2% in the SSC Boards and Kerin Pithawalla getting 88% in HSC. Special Achievement awards were presented to Dr. Julie Pardiwala for winning a gold medal by ranking first in presentation at 1st convention on Quality Circle and Allied Quality Concepts; Mithrem Jagirdar for winning gold medals in boxing, wrestling and judo at Gujarat State level and a bronze medal at Judo Kurash at national level; Shahnaz Irani for being commissioned as Lieutenant in NCC – being the only lady officer in 20th Gujarat Battalion.

Compared by Gulshan Vandriwala with the vote of thanks delivered by Cyrus Vandriwala, the function ended with due thanks to the guests and trustees of the Orphanage for providing Seervai Party Plot gratis, and numerous other, especially the volunteers who worked towards making the event a huge success. The function ended with ‘Chhaiye Ame Jarthosti’ and the national anthem.