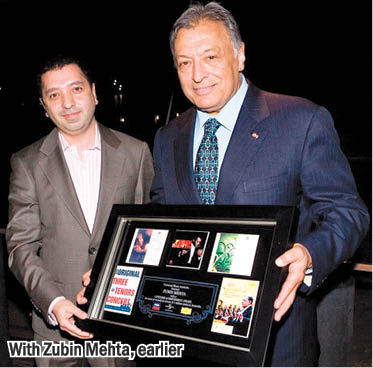 Cyrus has been integral in the growth of UMA’s Classics and Jazz department, recently expanding its activities into presenting live concerts, with UMA’s first festival to be held in September 2019. He has worked closely with a range of artists including Cecilia Bartoli, André Rieu, Dame Joan Sutherland, Richard Bonynge, Patrizio Buanne, Zubin Mehta, Judith Durham, Renée Fleming, Aled Jones and Jean-Yves Thibaudet.

Speaking on the occasion, Meher-Homji said, “I am deeply honoured to have been awarded the Medal of the Order of Australia. Professionally, there has never been a more exciting time to be working with classical music and jazz, and with the opportunities for the parallel universes of curation and rediscovery; what was once termed as ‘niche’ finally gets the chance to escape those self-imposed chains and be recognized for what it really is: music for all to enjoy.”

Cyrus trained as a concert pianist in Perth, Sydney and London, and holds a Master’s degree in musicology. His efforts have placed classical music front and centre to keep the works’ rich history alive. He has written in books and music journals about Percy Grainger, Eileen Joyce, Julius Katchen and Noël Mewton-Wood, and contributed to a series of magazines and newspapers, including Gramophone, International Piano Quarterly and The Australian. He’s also been the Executive Producer for recordings by greats including Greta Bradman, Rosario La Spina, Emma Matthews, Sol3 Mio and the Orava Quartet. In 1993, Meher-Homji created and published Soundscapes, a music magazine with international circulation. In 1999, he founded the Eloquence (Australia) label devoted to reissuing key recordings from the rich heritage of Decca and Deutsche Grammophon and in 2008 Meher-Homji launched his own television program, ‘Good Listening’, which continues to broadcast on SBS and Foxtel networks (in Australia), giving classical music regular television coverage.

Sir Lucian Grainge, Chairman and CEO of Universal Music Group, said, “There are few people in Australia, or the world for that matter, who have done as much as Cyrus to advance jazz and classical music and bring these essential and important art forms to even greater audiences. On behalf of all your collagues at Universal Music, our heartfelt congratulations.”