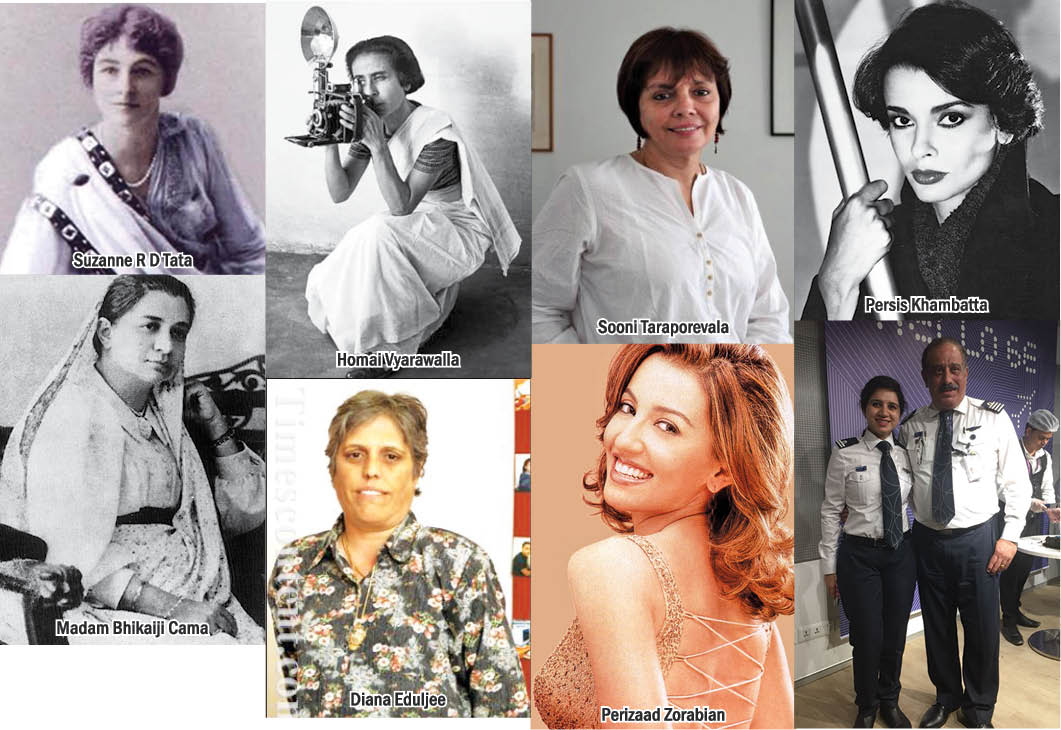 Throughout the Parsi-Zoroastrian history, Parsi women have all been high achievers – in Persia and India, and globally too! We had Artemisia of Halicarnassus (485 BCE) – Admiral of the Persian Navy and a lover of Xerxes I; there was Pantea Arteshbod (Aryash) – Commander of the legendary Immortal Army known as Persian Immortals or the Ten Thousand Immortals of Cyrus the Great; and there was Sura, the military genius – one of the greatest Persian heroines.

In India too, the early Parsi women shoulder to shoulder with the Parsi men – with extraordinary and courage that became legendary…

At the end of the 11th century, Parsis had established a small colony at Variav. The Rajput Raja of Ratanpur had imposed an unfair tax on Parsis, which they refused to pay, driving away his troops which were sent to enforce the same. Awaiting the ideal opportunity to attack the Parsis, the Raja sent a fresh contingent of troops from Ratanpur when the Parsi men were away attending a feast elsewhere. When the Parsi women realized that they would either be captured with dishonourable intent and/or killed, they donned their husbands’ armour suits and fought the tax collectors tooth and nail. They would have succeeded in driving the troops away but unfortunately one of the woman’s helmet came off exposing her long hair. This encouraged the soldiers of Ratanpur to rally round and fight with added vigour. It was one of the most unchivalrous acts of Indian history. Defeat was imminent. Choosing death and honour to defeat and ensuing shame, the brave Parsi women leapt into the river Tapti and perished. The sacrifice of the gallant Parsi women of Variav is remembered every year on Roj Ashishvang, Mah Fravardin as the Variava Behdins’ Parab. This almost genetic courage is seen in the adventurous spirit of the present day Parsi women too. Parsi women have put their thumb in every pie, pulling out the best of plums!

Indian Freedom Movement gave us several dedicated women who fought valiantly for our country – the best known being Madame Bhikhaiji Cama who even conceived the design of our Indian Tricolour and raised it, the first National Flag at the International Socialist Conference in Stuttgart (Germany) in 1907. Mithu Petit, daughter of Sir Dinshaw Petit, fondly called Mithuben by Gandhiji, played an important part in the Salt March at Dandi – one of India’s most iconic events in the freedom struggle.

Homai Vyarawalla, well known as ‘Dalda 13’, was the first photojournalist. Her photographs depicting the country’s transition from the British rule to the Independent Republic Nation are extensive records of history in pictures. BBC made a documentary on her life, career and her works.

Abroad too, Parsi women are making an indelible mark – the more recent one being aapri very own Neomi Jahangir Rao in Washington (USA), an attorney-at-law, a law professor and the Founding Director of the Center for the Study of the Administrative State at Antonin Scalia Law School. President Donald Trump has nominated her to be a Federal Judge of the US Court of Appeal for the District of Columbia Circuit.

For a community of just about sixty thousand, one can fill up a tome of the high fliers amongst its women. And literal high fliers at that! So many of our bold Bawis rule the skies – one of the youngest being Capt. Karishma Kanga, not nearly twenty years of age, and a full fledged pilot flying A320’s with pride and responsibility for almost a year! She says, “Flying has been my dream since I was three! I never realized when and how a kid’s dream was transformed into a passion trying to fit into my father’s shoes.” Her proud dad, Capt. Rashid Kanga is her inspiration, mentor and support system, who has helped her through and prepare for the hardships of this profession and in life.

Parsi women have done us proud across industries – names that come instantly to mind include Cornelia Sorabji – the first woman graduate of Bombay University and the first woman to read law at Oxford University as well as the first woman to practice law in India and Britain; Philanthropist Avabai Jamsetjee Jeejeebhoy – (wife of Sir Jamsetji Jeejeebhoy), remembered for building the Mahim Causeway; Diana Eduljee – the first captain of the Indian Women’s Cricket team (1978 to 1993); Dolly Nazir – competed in the 1952 Helsinki Olympics; Piloo Mody – Architect, Parliamentarian and one of the Founders of the Swatantra Party; Frene Ginwala – aided Nelson Mandela in abolishing Apartheid in South Africa and went on to serve as Speaker Of the House of Parliament for 7 years; Zerbanoo Gifford – Human Rights Campaigner; Nergis Mavalvala – Astrophysicist and Professor at the prestigious MIT; Spenta Wadia – Theoretical Physicist; Mahzarin Banaji – Professor of Psychology at Harvard University. In the entertainment industry too we have made a great name for our community with greats including Persis Khambatta – Miss India (1965), Actor and Model; Sooni Taraporevala – award winning Screenwriter, Author and Photographer; Amyra Dastur – Model, Film Actor, TV host; Mehr Jesia – Indian Super-model; Nauheed Cyrusi – Model, Film Actor, TV host; Nazneen Contractor – Film Actor; Nina Wadia – British-Indian comedian and TV Actor; Perizaad Zorabian – Film Actor, Model and Businesswoman; and Zarin Mehta – Musician and Executive Director of the New York Philharmonic since 2000. And so many, may more…

On Women’s Day on 8th March, I thank them, on behalf of all men, for being a great counterpoint to men everywhere – may all the ladies fly high across the various fields they choose to explore. Women certainly make the more interesting half, the better half of the population. And, as the song goes, “I love the Ladies, I love ‘em all, Married or free, they’re all the pretty girls to me.”

A male member’s name has inadvertently crept up in this article. It is Mr. Piloo Mody. He is not one of the founders of the Swatantra Party. The founders are C. Rajagopalachari and Minoo Masani.