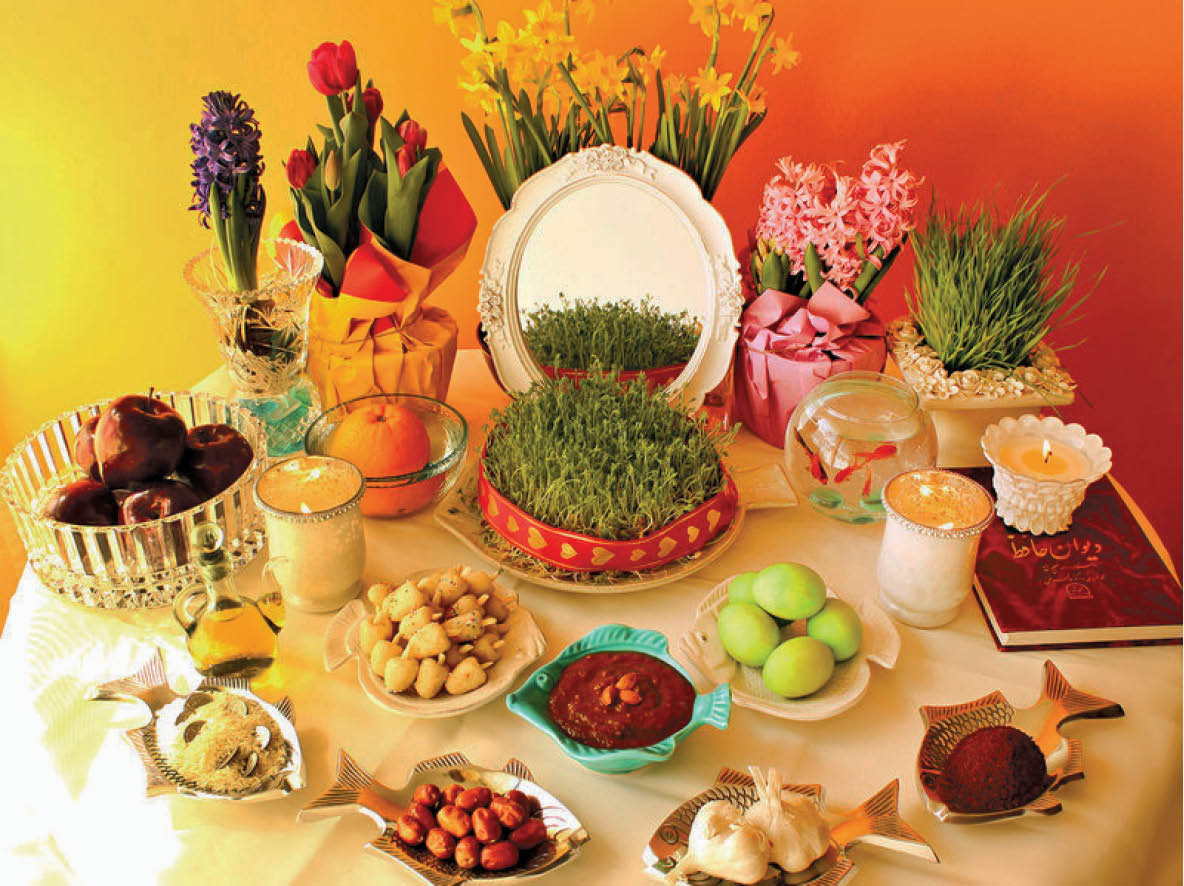 Farzana Cooper is an enthusiast Zarathusti who believes she will never stop learning because life never stops teaching.

Navroze is the first day of the Zoroastrian Fasli calendar, literally meaning ‘New Day’ i.e. the beginning of Spring, the first month – ‘Farvardin’. Persians perform different traditions before and after ‘Norouz’ – such as Spring cleaning (Khane Tekani), Festival of Fire (Chaharshanbe Suri), visiting relatives on Navroze and decorating the special Navroz table or ‘Haftseen’ with seven auspicious articles. Coincidentally, this conflates beautifully with the seven Ameshaspentas – it makes one wonder, if that, in fact, was its very genesis!

Let’s start with Zarvan – it’s not really an Amshaspand, but the divinity of time. ‘Time’ – where the whole universe thing is believed to have started. Ancient texts say time has no start or end in Mazda Yasna. At some point of time, along the way, a Divinity of Time comes into the picture to give a better explanation about eternal Good V/s Evil conflict, and its impact on natural phenomena like the two equinoxes.

Today, we represent time with a clock. In ancient times, when they did not have a concept of clock, they would place an egg on a mirror and watch it very carefully to see when it would move because they believed that the world was placed on one horn of a cosmic bull that stood on the back of a cosmic turtle and that the turtle swims in the shoreless ocean of time. At each exact time of Navroze, the Bull would get tired of keeping the earth on one horn and shift it from one horn to the other. This would cause the Spring and Winter Equinox and that could be detected if you watched the egg on the mirror very carefully and registered its shaking! The mirror reflects the time (Zarvan) and infinite possibilities that in store for future. The egg is a representative of creative powers of Mother nature and of constant renewal. This is the principle why a Mirror and colorful eggs decorate Navroze tables.

(I) Spenta Armaiti / Spandārmad: A female AmeshaSpenta, reflecting fertility and creative power. She looks over the Earth, and is represented by mud/stones on the Navroze table, as also by the decorated eggs. She symbolizes productiveness of the earth and all the living world, which is a mighty force and progress. Associated Colour: Deep Blue.

(II) Haurvatat / Khordad: A female AmeshaSpenta, reflecting wellbeing and perfection. She looks over Water Bodies, and is represented by water/wine on the Navroze table. She symbolizes robust health, peace, harmony, and balance in life. Associated Colour: Light Blue.

(III) Ameretat / Amardad: A female AmeshaSpenta, reflecting immortality. She looks over the Plant world, and is represented by plants/grass/fruits on the Navroze table. She symbolizes defiance to extinction of the living world, by providing food and energy to sustain life. Associated Colour: Green.

(IV) Asha Vahishta / Ordibehesht: A male AmeshaSpenta, reflecting Justice, Truth and Universal Order. He looks over the Laws of Nature or ‘Asha’. On the Navroze table, His presence is illustrated with an oil lamp or candle lights. Associated Colour: Red

(V) Vohu Manah / Bahman: A male AmeshaSpenta, reflecting the Good Mind and Compassion for all living things. This Amesha Spenta illustrates that Ahura Mazda is not Human centric and has equal love for all his creations. Symbolized on the Navroze table by eggs. Associated Colour: Yellow.

(VI) Kshetra Vairyu / Shahrevar: A male Ameshaspenta, reflecting Dominion or Control over self, denoting Mind over Matter. Control over one’s own mind and self-realization, rather than dominion over others, is the bedrock of Gathic philosophy. Self-realization translates to ‘Khoddamand’ (Khod= Self, mand= possessing). This idea of self-realization is dramatically different from that in the Abrahamic Faiths where nothing should come from the self and everything should come from above. Symbolised on the Navroze table by metal/coins, preferably gold coins because it resists rust. Associated Colour: Orange.

(VII) Spenta Mainyu / Ahura Mazda: A gender-neutral Ameshaspenta, reflecting Wisdom and Knowledge. Symbolised by a book on the Navroze table as the book has the ability to impart knowledge and progress. Many Zoroastrians around the world display the Zend Avesta. Associated Colour: White

Amesha Spentas are like the seven colours that we see when light passes through a prism – they may be seem visually separate but they are all part of the same phenomenon. If you merge them together, they form the white light – Spenta Mainyu.

View all posts by Farzana Cooper →