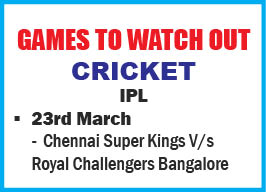 Bengaluru FC Win Maiden Indian Super League Title: An outstanding display of great tactics by Bengaluru FC resulted in their victory during this season. Both teams, Bengaluru and FC Goa, ended up locking scores at 0-0 even after their allotted 90 minutes. When the goalless contest headed into extra time, Bengaluru’s Rahul Bheke scored the crucial goal with a header in the 27th minute.

South Africa Beats Sri Lanka: South Africa won their first T20 contest against Sri Lanka with a Super Over Finish at Newlands, Cape Town. Batting first, Sri Lanka scored 134-7 in 20 overs as Kamindu Mendis top scored with 41 off 29 deliveries. For the hosts, Andile Phehlukwayo snapped up 3-25 in his four overs. In reply, the South Africans lost wickets quickly during the latter part of the contest and ended with 134-8 in 20 overs. With scores tied, the Super Over decided the winner – South Africa, with David Miller adjudged ‘Man of the Match’.