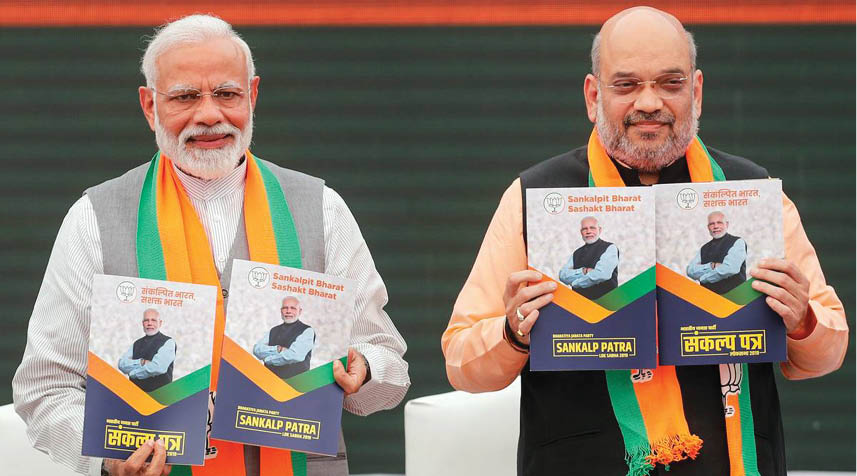 On 10 April, 2019, the Indian Express reported that The Citizenship (Amendment) Bill or CAB, cleared by the outgoing Lok Sabha, proposed providing citizenship to “Hindus, Sikhs, Buddhists, Jains, Parsis and Christians from Afghanistan, Bangladesh and Pakistan”. But in the BJP’s Sankalp Patra (Manifesto) released on 8th April, 2019, Christians and Parsis were omitted with the manifesto stating, “Hindus, Jains, Buddhists, Sikhs escaping persecution from India’s neighbouring countries will be given citizenship in India.”

Within an hour of The Indian Express contacting BJP leaders to check on the omission, the Sankalp Patra posted on the party’s official website had added Christians to the list — the Parsis remain absent. However, BJP General Secretary and Manifesto Committee member, Bhupender Yadav, said, “The Citizenship (Amendment) Bill remains the same. There is no change in our policy of protecting all minorities. In fact, in the Sankalp Patra, under the Inclusive Development title, the party makes it clear that we are committed to the empowerment and ‘development with dignity’ of all minorities — Muslims, Christians, Sikhs, Buddhists, Jains and Parsis, etc.” Yadav said he had given instructions to add Christians to the list in the party document.

The Citizen (Amendment) Bill, 2019, seeks to amend the Citizen Act of 1955. It relaxes the eligibility rules to get Indian citizenship for immigrants belonging to six minority religions — Hindus, Sikhs, Buddhists, Jains, Parsis and Christians — from Pakistan, Bangladesh and Afghanistan.
The printed version of the Sankalp Patra stated, “We are committed to the enactment of the Citizenship Amendment Bill for the protection of individuals of religious minority communities from neighbouring countries escaping persecution. We will make all efforts to clarify the issues to the sections of population from the Northeastern states who have expressed apprehensions regarding the legislation. We reiterate our commitment to protect the linguistic, cultural and social identity of the people of Northeast. Hindus, Jains, Buddhists, Sikhs escaping persecution from India’s neighbouring countries will be given citizenship in India.”

While protests have been seen against the obvious exclusion of Muslims in the list of people the government is willing to provide citizenship to, far bigger ones have been seen in the North East, opposing the ease with which illegal immigrants will be able to become citizens. The indigenous communities of Assam see the Bill as a threat as it goes against a provision in the Assam Accord, which mentions that any person who came to Assam after midnight of 24 March, 1971, will be identified as a foreigner. The people of Assam also fear that an influx of immigrants will take a toll on the limited state resources and alter its demography. Indigenous communities fear being reduced to a minority in their homeland, outnumbered by an influx of illegal migrants from Bangladesh and other countries. Many see it as a threat to their identity.