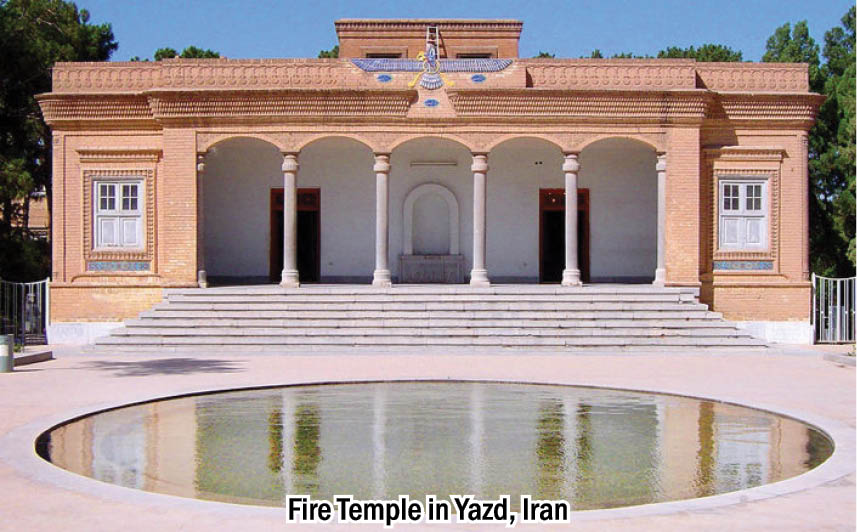 Both – Parsi and Irani Zoroastrians are ethnically of Persian (Iranian) origin. Parsis who came to India about 300 years after the fall of the Sasanian Empire (i.e., around the tenth century A.D.) trace their ancestry back to the province of Khorasan, known in ancient times as Parthia. The city of Mashad is situated in this province, northeast of Iran, near the borders with Turkmenistan and Afghanistan. It was a major oasis along the ancient Silk Road connecting with Merv to the East. While it was once a major Zoroastrian bastion, Mashad today is named after the shrine of Imam Reza, the eighth Shia Imam. With the Mausoleum of Ferdowsi Toosi also situated in Mashad, the city is often colloquially called the city of Ferdowsi.

While the Parsis appear to have moved to India from Khorasan (North Eastern Iran) during the tenth century AD., our Irani Zoroastrians (mostly settled in the desert provinces of Yazd and Kerman in South Central Iran) continued to stay on in Iran despite severe persecution by Arabs, Turks, Mongols and various other marauding invaders, over several centuries after the Parsis had settled in India.

There are no major differences between the religious doctrines, beliefs and practices of Parsis and Irani Zoroastrians. In fact, in India, it is a settled law that the term ‘Parsi’ includes Irani Zoroastrians (68 Bombay Law Reporter, Pg. 794: Jamshed A. Irani V/s Banu J Irani).

Yazd is situated about 200 miles south-east of Isfahan and Kerman and about 380 miles from Bunder (port) Abbas. They are both situated on the confines of two extensive deserts, the Dasht-e-Kavir and the Dasht-e-lut, which to the north, cover an area of over 500 miles, and which are separated by a chain of rocky mountains, through which ancient caravans traced their way with great difficulty.

The condition of the Zoroastrians who stayed back in Iran, had always been miserable. In 1511, they wrote to the Parsis in Navsari, that since the reign of Kaiomars (the first legendary king of the pre-historic Peshdad Dynasty), they had not endured such sufferings, even under the execrable rule of Zohak, Afrasiab, Tur and Alexander!

One of the harshest concomitant circumstances of the conquest of Iran by the Arabs was the Jizia tax. Muslims were the only community exempted from this religious tax – all the other ‘infidel inhabitants’ of the Kingdom – Armenians, Jews and Zoroastrians – were subject to it. However, among minorities, the Zoroastrians were the worst hit. Jizia was a tax ‘non-believers’ (i.e. non-Muslims) had to pay in order to practice their own religion. The Quran and Hadiths mention Jizya without specifying its rate or amount. However, scholars largely agree that early Arab rulers adapted existing systems of taxation and tribute that were established under previous rulers of the conquered lands, such as those of the Byzantine and Sasanian empires.

Writes Prof. Edward G. Browne in his book titled: ‘A Year Amongst the Persians’ (the year being 1887-88). “Up to 1895, no Parsi was allowed to carry an umbrella. Up to 1895, there was a strong prohibition upon eye-glasses and spectacles; up to 1885 they were prevented from wearing rings; their girdles had to be made of rough canvas, but after 1885, any white material was permitted. Up to 1896, the Parsis were obliged to twist their turbans instead of folding them. Up to 1898, only brown, grey and yellow were allowed for body garments but after that, all colours were permitted, except blue, black, bright red or green. There was also a prohibition against white stockings and up to about 1880, the Parsis had to wear a special kind of peculiarly hideous shoe with a broad, turned-up toe. Upto 1885, they had to wear a torn cap, up to about 1880, they had to wear tight knickers, self-coloured, instead of trousers. Up to 1891, all Zoroastrians had to walk in town and even in the desert, they had to dismount if they met a Mussalman of any rank whatsoever.”

Browne writes about an incident in 1860 where a Zoroastrian man of seventy years went to the bazaar in white trousers of rough canvas. According to Browne’s account, “they (the Mussalmans) hit him about a good deal, took off his trousers and sent him home with them under his arms.”

Fortunately, around the end of the fifteenth century, ties, so long broken between the Zoroastrians of Iran and those settled in India, were happily renewed. In a letter to the Parsis of India dated September 1, 1486, Nariman Hoshang wrote from Sharifabad, declaring that all the Irani Zoroastrians had been wanting for centuries, to know if any of their co-religionists still existed on the other side of the world!

Parsis settled in India were shocked to learn that while they prospered in the land of their adoption, their poor Irani brethren in the spiritual Motherland, suffered. A ‘Society for the Amelioration of the Conditions of the Zoroastrians in Persia’ was founded and the valiant Maneckjee Limji Hataria was dispatched as an agent of the Society. In 1854, Hataria reported the number of Zoroastrians in Yazd to be around 6,658 while 450 lived in and around Kerman. Only 50 Zoroastrians lived in Tehran and few in Shiraz. At about the same time, the Parsis in Bombay numbered 110,544. Hataria struggled against oppression of every sort and in the year 1882, he succeeded in getting the hated Jizia tax abolished.

Today, of course, Zoroastrians are no longer persecuted. In fact, some years ago a World Zoroastrian Congress was held in Tehran under the patronage of the Iranian Government. Iran always evokes a multitude of passions and emotions. On one hand, there is the joy of being with one’s fellow Zoroastrians, joining them in worship at the holy fires and sacred shrines. However, when one reflects on the hardship that our ancestors have endured, it brings tears to our eyes.