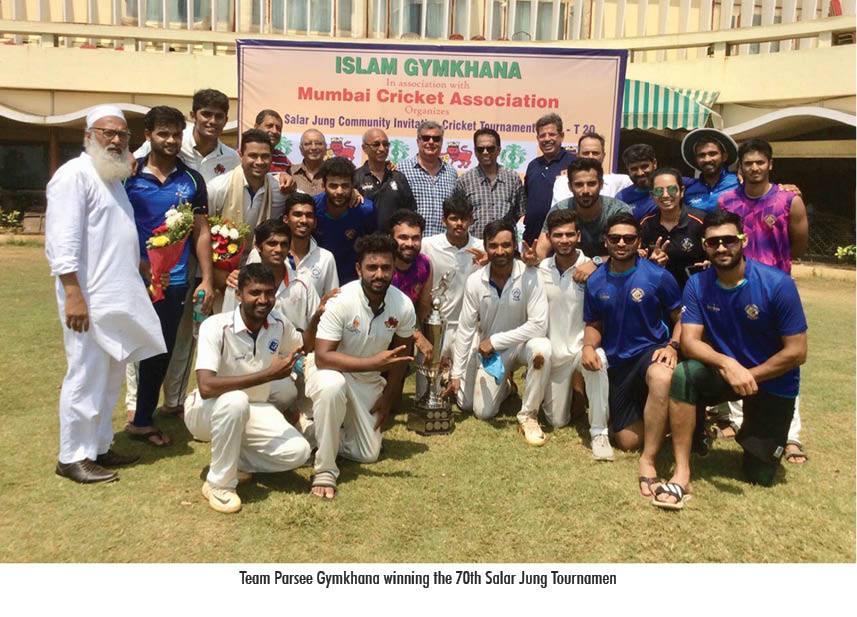 Batting first, team PG notched up a comprehensive 205-9 in 20 overs. Opening pair – Aakarshit Gomel (36 off 14, including six fours and one maximum) and Ashay Sardesai (48 off 35, including six fours and a six) got PG off to a flying start, with a partnership of 74 runs. Sufiyan Shaikh contributed 20 runs while Aditya Dhumal played 12 ball 28 with two boundaries and one six. Rraunak Sharma (30 off 12 balls) and Aman Khan (27 off 11 balls) performed well as middle-batsmen hitting boundaries. Amongst the SCC bowlers, Asif Shaikh snapped up (4-24) in his four overs. SCC came out to chase the total down their total but crumbled under PG’s pressure, succumbing at 172 in 19.2 overs. Sachin Yadav top scored with 62 while Akash Parkar made 38. PG’s bowlers – Aakarshit Gomel picked 3 for 28; Aditya Dhumal snapped up 3 for 25; Shams Mulani snared two wickets while Shivam Malhotra and Rraunak picked one each. SCC’s Asif Shaikh won the award for Best Bowler while Sachin Yadav took home the Best Batsman award. PG’s Aditya Dhumal won Man of the Match.

Speaking to Parsi Times winning skipper of Team PG, Aditya Tare, stated, “I’m extremely happy as captain to win trophies for the PG team. We have a great unit backed with a top coach and great management. All credit to the players for their efforts. We are now aiming for two major trophies in the coming season.”

Man of the Match, Aditya Dhumal, said, “It has been a great feeling to contribute to PG’s win. I completely felt at home in right from the beginning, all thanks to Khodadad sir and Vinayak Mane sir, who have been most supportive.”

Coach Vinayak Mane, added, “There was great commitment shown through the contest. Every cricketer gave his best – it was a complete team effort. Aditya Tare’s availability as captain even during the IPL season was very helpful as it gave PG the added experience. We thank the Cricket Committee.”

The man of the hour, Vice President and Cricket Secretary of PG, Khodadad Yazdegardi, concluded with, “It feels nostalgic to win three tourneys in a row and also win the second T20 tournament of the season. The boys have worked very hard under the guidance of Vinayak Mane and the team was led very well by Aditya Tare, who played all the games. I look forward to raise the bar further in the coming season and winning more major tournaments.”