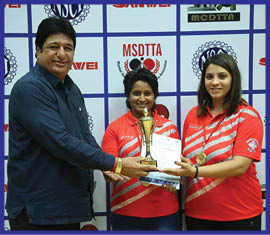 On 11th May, 2019, hushed whispers abounded on the impending clash between Parsee Gymkhana and Hindu Gymkhana, to determine the top position in the Premier Division of the Sanwei Annual Inter-club Table-tennis League, which was held at the NSCI (9 – 13 May, 2019).

After Sanish trounced Tanmay Rane in straight games, Zubin Taraporewalla faced the former international Omkar Torgalkar. After sharing the first four games, Zubin quickly notched up a 5-1 lead. Displaying dogged tenacity, Omkar rallied to pip Zubin, helping Hindu Gymkhana to draw level. In the crucial third match, 13-year-old Havish Asrani was two games down against Yugandh Zende of PG in quick time. The talented Havish held on to win the next two games. In a shocking reversal of fortunes, Yugandh squandered a 5-1 lead to gift the match to Asrani. In a must-win situation, former Maharashtra No.1 Sanish, then defeated Omkar to draw at 2-2 for the Marine Drive neighbours and rivals.

In the final and decisive encounter between Zubin and Tanmay, in front of a wildly cheering crowd, Zubin went 2-1 up. In some of the most thrilling moments of the epic tie, Zubin found himself quickly, and hopelessly, 2-9 down. But the All-Parsee champ proved his mettle to stage a miraculous recovery to win the game and match, and along with it, to put Parsee Gymkhana on the top spot for the second successive year. The final tie between PG and MLWB-KKB ‘A’, which the former won, was thus a mere formality.

Parsee Gymkhana thus achieved a rare double, winning both Men’s and Women’s First Division titles in the same year. In third place was YMCA, with Sarosh Shroff, Percy Mehta, Ravi Chopra, Homiyar Mohta and Suraj Chandrasekhar. The tournament, held under the auspices of MCDTTA and MSDTTA, was ably conducted by Chief Referee SS Gamre under the direction of Jt. Hon. Secretaries Mahendra Chiplunkar and Rizwan Amlani.