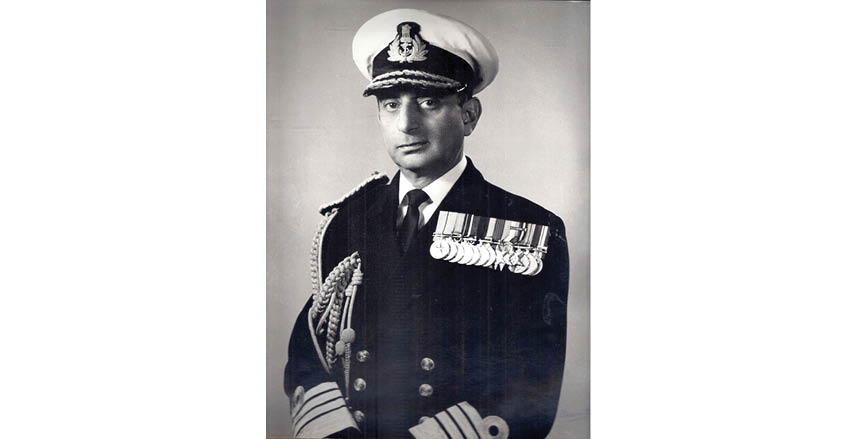 20th May, 2019 marks the birth centenary of Late Admiral Jal Cursetji, PVSM, or Ex-Chief of the Indian Naval Staff. Commodore M Bhada (Retd) shares a tribute to the much revered Admiral, alongside his amusing reminisce as a young Lieutenant.

Late Admiral Jal Cursetji (20 May, 1919 – 29 Jan, 1991) served as independent India’s ninth Chief of Naval Staff (CNS) from Mar 1976 – Feb 1979. Hailing from Jabalpur, in 1935, the Admiral appeared for and championed the All India entrance examination for Mercantile Training Ship – Dufferin. Post training, he joined the Royal Indian Navy (RIN), and was sent to the UK for training as a midshipman onboard HMS Foxhound and HMS Suffolk, where he witnessed WW-II.  In 1941, he returned to India to serve on several ships of the RIN; his shipmates remember him for his high professional competence, devotion to duty and qualities exemplifying future greatness.

Admiral Cursetji later joined the Hydrographic service as its first Indian Officer and commanded the survey vessel INS Investigator in the early 50s. From 1950 he was the Surveyor-in-Charge, Marine Survey of India for four years. In 1955 he became the first Indian Chief Hydrographer to the Government, an appointment he held for over two years. He carried out pioneering survey work in the Gulf of Kutch and on the west coast. He was a tough taskmaster instilling in his juniors the same thorough attention to detail and sense of responsibility that he himself displayed.

He married Navaz Dallas in 1955. He went on to command the Destroyer INS Rajput and the Aircraft Carrier INS Vikrant with distinction, also serving as the Indian Defence Attaché at Washington for three years. Promoted to Flag Rank in Dec 1967, Admiral Jal took over as the Chief of Personnel before becoming the Vice Chief of the Naval Staff in 1970. Their finest hour was the 1971 war when their formidable teamwork made a major contribution to the victory of the Indian Navy.

Admiral Jal Cursetji took over as the Chief of the Naval Staff in March, 1976. The highlights of his tenure include taking over responsibility for Maritime Air Reconnaissance and Operations from the IAF, formation of the Indian Coast Guard, enhancement of force levels with the induction of many new platforms, expansion of the missile arsenal, the establishment of Goa Naval Area; and upgrading the Southern Naval Area to a full-fledged Command. The Admiral retired from Naval service in Feb 1979 and spent his time in Mumbai.

As a young Lieutenant in the Navy, my impression of Admiral Cursetjee, was that of a very soft spoken, well-articulated officer and gentleman. My initial association goes back to 1967-1968, when he first visited our squadron in Dabolim, Goa having assumed command of our Aircraft Carrier, INS Vikrant. I was nominated as his Liaison Officer for the duration of his short stay in Goa. No, it was not the Bawa-connection, though he did casually inquire if I wore my Sudreh and Kasti regularly!

Within a few weeks thereafter the squadron embarked on board the carrier for an operational work-up.

As an ex-Supply Officer who had been sent for flying as a Midshipman, I had not done my Midshipman’s Board nor any Sub’s courses at Cochin and didn’t have a watch-keeping certificate. But, inspired by another mate with similar standing who was able to convince the ship’s Navigating Officer to allow him to keep watches on the Bridge, I made a similar request, which received Captain Cursetji’s prompt approval.

I started keeping watches on the Bridge after the day’s flying was over; whilst in harbour I’d work as the Officer of the Day (OOD). Once, during the monsoons when we were situated a little off Chennai, in keeping with the naval tradition, the Captain hosted a cocktail party for the local, civil and military dignitaries. As we were receiving guests, the Conservator of Ports tells Capt Cursetji, “Captain, your ship is fifteen feet out of position.” Cursetji, nonchalantly, said, “Oh, is that so?” then turned to me and ordered, “OOD, kindly do the needful please!” and walked away!  Yours truly was left, holding the baby, totally confused. Imagine moving an aircraft carrier, which is tied-up alongside a jetty in harbour, by 15 feet!

When I sent for the ship’s Boatswain’s Mate, he was totally aghast, but since we were to be seen doing something, I made an announcement loud enough to be heard – that the lower decks be cleared and all-hands to assemble on the forecastle. After about an hour, with the party in full swing, I walked up to Captain and with a smart salute, announced, loud enough for those around him to hear, “Ship in position, Sir!” For a moment he looked confused but soon found his composure and said “Oh, well done, thank you, carry on please!” I quickly saluted him again and left! Needless to say, the ship had not moved an inch – nor were any questions asked. Imagine my ecstasy when I received my Watch-Keeping certificate signed by Captain Jal Cursetji! I was transferred to INS Ranjit as a full-fledged Executive Officer, all thanks to the great Officer and Gentleman, Admiral Jal Cursetji, PVSM.

About By Commodore M Bhada (Retd)

View all posts by By Commodore M Bhada (Retd) →