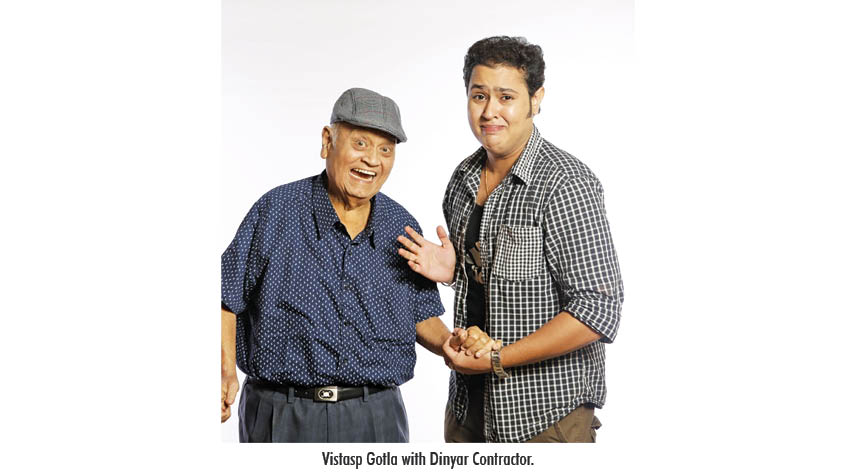 He may have been the eternal bachelor, but Dinyar Contractor never missed on the love, adulation and adoration from his eager, younger colleagues. Parenthood is not the reserve of biology; a father-son relationship doesn’t always warrant flesh-and-blood. In a fitting heartfelt tribute, in our Father’s Day Special issue, Dinyar Contractor’s protégé – actor and director, Vistasp Gotla reminisces and shares his thoughts and the closeness with his father figure – his ‘Dinsu Sir’, the Comedy King of Parsi Theater, who passed away last week. 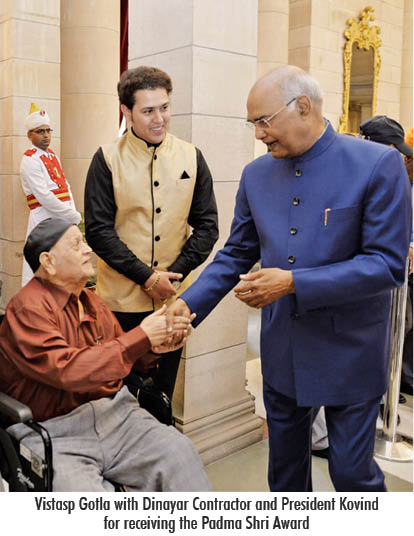 He was a man of all seasons! We were inseparable, very much like father and son. I write this with immense love and respect, words fail me in trying to share our special connection that brought together two theatre personalities.

Dinsu Sir performed with eternal class, grace, style, passion and elegance across innumerable roles on the entertainment platform. I met him for the first time in 2012 at NCPA for Zochild – he had come to see my play and wished me luck for my theatre production ‘Blazzing Fire’. Then on he would come to watch some of my shows and meet me back stage to congratulate the entire team, with “Keep it up Dikra!”

In 2017, we decided to elevate our mutual appreciation on a professional level and we collaborated over a production, and the rest is history! There was no looking back, and there was no denying his father-like influence on me – he was an encyclopaedia of the theatre world, an institution in his own right! I was very fortunate to be associated with him for four years as an actor, a business partner, his right hand, but most importantly, his ‘muh-bola-son’. I learnt so much from the legend himself – that has helped me tremendously to further my expertise in theatre. His faith in me encouraged him to share a few of his secrets of the trade. We watched numerous plays together, partied and regularly spent quality time discussing theatre related activities. He was a very funny man and always liked playing pranks on people.

As prestigious as it was to share the same stage with the legend, you needed to be alert because Dinsu was super spontaneous and could twist a line to suit the audience. He knew the exact pulse of his audience. People would go into crazy applause just seeing him make an entry! The rest of us actors on stage had to patiently wait for the applause to end so we could continue the scene! That was the unbrideld love and respect he received wherever he performed. His comic timing, expressions and dialogue delivery was impeccable and it sent people into uncontrollable laughter – Dinsu was a royal producer, brilliant writer, great editor, fine director and an actor par excellence. I learnt much from him as an actor and producer. He was a perfectionist – his outlook towards life was unique. He was huge-hearted, extremely generous with all. Despite his amazing celebrity and fame, he was grounded – that is perhaps one of the best lessons he taught one and all.

It was a great privilege to share the stage with the legend in his very last performance – the hit play, ‘Bairano Bahubali’ (2018), where he played the parallel lead alongside me, minus the wheel chair all due to his strong willpower. My most memorable moment was being by his side as he received the prestigious Padma Shri from Indian President Kovind, with the PM Modi, at the Rashtrapati Bhavan, in New Delhi. It was an indescribable moment of pride – I remember tears of joy rolling down my face as my mentor received one of India’s highest civilian awards – and a much deserved one, having dedicated a fabulous 57 years of his life to the field of performing arts. The cherry on the cake was to hear PM Narendra Modi tell him, “Parsio, hasta raho ane hasavta raho!”

His last few days were very difficult – to see him go through the illness. He was a real fighter with an indomitable spirit, But I am sure Dinsu Sir must be making everybody laugh away even in heaven with his amazing sense of humour! There was only one Dinyar Contractor and nobody will ever replace him till eternity – not in theatre, and not in my life. Thank you Dinsu Sir for playing such important roles – on and off stage in so many people’s lives. May you Rest In Laughter… Miss you, Sirji!