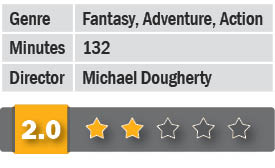 If you thought the giant Anaconda was the largest serpent or that the blue whale was the largest living mammal, you need to brush up on your GK – but after watching Godzilla 2. Returning to the big screen after a gap of five years, Godzilla (from the Japanese ‘Gojira’ opens with a recap from the 2014 ending – Dr. Emma Russell (Vera Farmiga) and husband Mark’s son, Andrew had perished in the San Francisco carnage caused by monsters (Titans) the height of skyscrapers. Now, eco-terrorist Col. Jonah Alan (Charles Dance), who controls the agency Monarch, kidnaps Dr. Russell and her daughter Madison (Millie Bobby Brown), to get full control over Orca, the instrument which is capable of appeasing the Titans through sound waves. Emma’s estranged husband, Mark (Kyle Chandler), apart from others, is coerced into joining forces.

Godzilla 2 is a mishmash and an incoherent take on Monsters V/s Humans. The very premise of humans sacrificing themselves or allying with another monster (Godzilla) to take down others – Mothra, Rodan and the 3-headed serpent – King Ghidorah – seems preposterous and over the top, especially when one learns that Godzilla, or Gojira, is reportedly the longest running movie franchise (since 1954) in history, with 35 films (32 in Japan and 3 in Hollywood).

While director Dougherty, who’s co-written the story and screenplay, falters, the sound design (Arik Aadahl) and sound effects (Malte Biebr) are a redeeming factor. The first half is more of humans than monsters, who unceasingly creep out of the woodworks in the second half. It’s sheer sound and fury, and it remains to be seen whether G2 affects the fortunes of Godzilla V/s King Kong, due out next year.