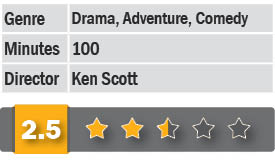 The major advantage of watching an international production (in this case French/Indian/Belgian) is that it’s shot in a variety of locations – in this regard the film scores. The inherent drawback is that the film tides over a multitude of subplots too briskly for comfort. At a mere 101 minutes, the film packs in a few international actors while failing to deliver the vital knockout punch.

Ajatashatru Lavash Patel (Hearty Singh as the young Aja) learns one day from his single mother (Amruta Sant) that they are indeed poor and that his French father Pierre lives in Paris. Armed with this meagre information and a counterfeit hundred Euro currency note, the grownup Aja (Dhanush), now a mini-conman, embarks on a journey to Paris in an attempt to trace him. He encounters a young American woman Marie (Erin Moriarty) who’s just broken up with her boyfriend and on the rebound, falls for Aja. A collusion of circumstances leads to Aja missing his date at the Eiffel Tower and proceeding to Spain and later to Rome where he meets the Italian star Nellie (the Argentinian Berenice Bejo).

Filmed in India, Paris, Rome and Brussels, and adapted from the 2013 French novel ‘The  Extraordinary Journey of the Fakir Who Got Trapped in an Ikea Wardrobe’ by Romain Puertolas, the film tries valiantly to stay true to the script – reproducing scenes of him being transported to Rome in a suitcase and later on in an air-balloon, besides interacting with Libyan refugees and doling them out a hundred thousand Euros in cash.

The Tamil superstar Dhanush is in practically every frame. The writers have largely eschewed showing India in the pitiable condition which international productions revel in. Premiered at the Sydney Indian Film Festival, the film fails to rise above mediocrity, the Bollywood number where Dhanush shakes a leg – and every other parts of his body – notwithstanding. The costume design by Valerie Ranchoux is commendable. So is the editing, at a taut 100 minutes.