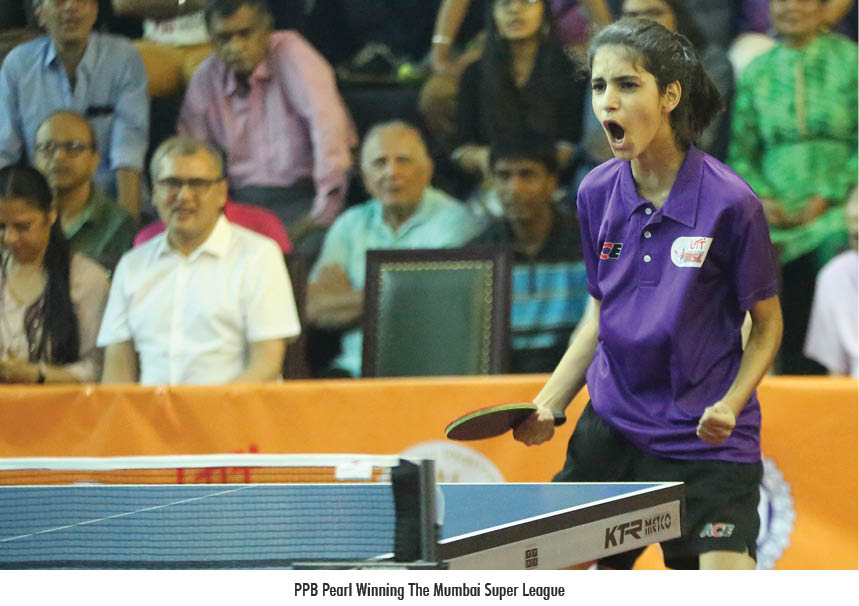 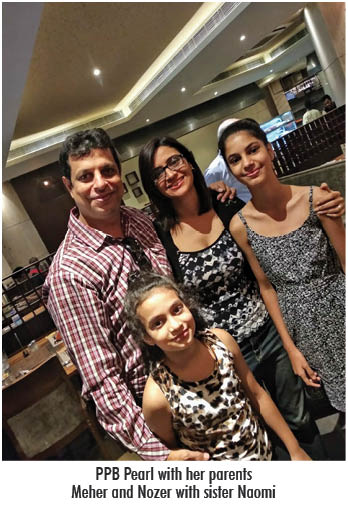 12-year-old Pearl Amalsadiwala, from Salsette Parsi Colony (Andheri East), is proving to be quite the Table Tennis prodigy, especially with her recent win at the prestigious fifth edition of the ‘Mumbai Super League’ (MSL) – a franchise based team tournament at a Mumbai Level, on the lines of the IPL. Conducted by the Mumbai and Thane District Table Tennis Associations, it was held at the NSCI Club from 30th May to 2nd June, 2019.  Though just twelve, Pearl participated in the Junior Girls (Under-18) to vanquish her competition, which was much older and more experienced!

Pearl shone the brightest during the finale, being instrumental in bringing victory to her team –  Team ACE – which was down by 5- 7. She turned it around in her Singles Match by winning two crucial points against her fancied opponent – the No. 2 ranked player! In addition to this brilliant performance, Pearl won a further 2 crucial points in the Doubles, bringing the two teams in the finals on par, at 12 points each. In the Finals, the veteran player of her team beat the opponent making ACE reign supreme!

Speaking to Parsi Times about her much celebrated win, Pearl says, “I truly feel proud and happy that I was able to help my team reach to the Gold. I was under tremendous pressure as I was up against a very good, No. 2 player. But I kept myself motivated and went all out. Despite losing the first set narrowly by a point, I didn’t give up and managed to win the other 2 sets which helped my team come back into the competition. So I am truly happy for myself and my team!”

A student in Class VIII at The Maneckji Cooper Education Trust, Pearl’s first encounter with the racquet started at the age of seven, when she started playing Table Tennis locally in the Colony, inspired by her father, Nozer Amalsaidwala. Her first formal entry was the FOZAWAC Table Tennis tournament (2014) where she played the Under-14 category but lost in the first round. Even so, the organizers, impressed with her zeal and dedication, awarded her the ‘Upcoming Player’ Award. That was the turning point for Pearl.

Her professional training started in March 2014 under coach Kalpesh Loke and she has since played at the District and State levels, achieving Mumbai’s No. 1 (Under-10 in District) and No. 5 in Maharashtra State, after winning a Gold at the District and a Silver at the State level tournaments. In 2017, she represented Maharashtra in the National Championships, narrowly missing the Bronze. In 2018, Pearl started playing the Under-15 category and won a triple Silver in Under-15, Under-18 & Under-21 category at the MIG District Tournament. She also represented Mumbai at the Maharashtra State Championships in the Under-15 and Under-18, winning the Bronze and Gold, respectively. She also won the Bronze in the Doubles category. At the end of 2018, she was ranked No.4 in Mumbai; No.14 in Maharashtra and No.48 All-India in the Under-15 category.

In May 2019, Pearl was identified as a Khelo India Talent (KIT) by the Government of India, a prestigious honour for the ‘Top 1000 Athletes’ in the country, across various sports. This entitles her to undergo sponsored residential training at select training academies across India, to continue pursuing her passion for Table Tennis.

She trains daily for 3-4 hours under her coach, and has also travelled to China for training. Pearl is the proud recipient of numerous awards including ‘MSSA Sports Excellence Award’; ‘Zochild Rising Star Award’; ‘XYZ Xceptional Zoroastrian Award’; and ‘Dabar Immuno Champ Award’.

“Immaterial if Pearl wins or loses, for us what’s important is that she should fight till the end. She has the talent and the dedication to go very far in her endeavours and she is an inspiration for us. We are truly proud of her achievements and will continue to support her aspirations for as long as we can,” says proud parents Meher and Nozer Amalsadiwala. Not surprisingly, Pearl has proven inspirational to her 9-year-old sister, Naomi, who is currently training in Gymnastics and Table Tennis.

“My main aim in life is to qualify for the Olympics and win the Olympic Medal for India. My biggest support system is my family and my coach. Their support, faith in me and dedication keeps me going,” shares Pearl, who aspires to be amongst India’s Top 5 ranked players. “Sports or any other activity (has to be something that you are passionate about) outside academics should be pursued whether professionally or at a serious hobby level. It helps us to balance out the stress, learn through our mistakes, overcome our weakness and helps one stay motivated,” she concludes.