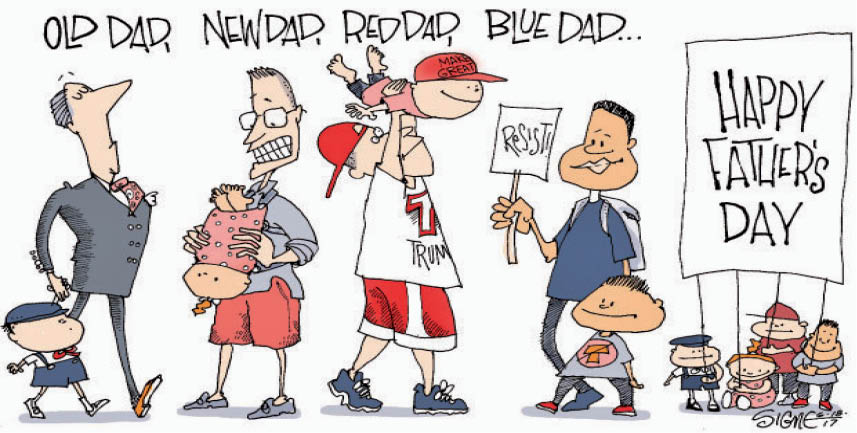 Meherbai’s Mandli met on Father’s Day at her spacious house. Meherbai had ordered Whiskey Burgers, Fish Tikkas and Honey Chicken from her club; beer was kept chilled and for deserts, she had slabs of Jack Daniel liquor chocolates which she had broken into pieces and arranged artistically on a huge Bakarat -crystal dish.

Banoo Batak: What is the topic of discussion today?

Meherwanji: Use your brain, Banoo. We’ll discuss fathers! What else?

Alamai Eienstein: Banoo is so short that her brains are too near to her rear!

Meherbai: No personal remarks! Banoo, tell us about your Pappa.

Banoo Batak: My pappa was 4 feet 9 inches tall, dark and handsome. I have inherited his good looks and bad manners. My mom was slim and tall, so pappa had a special stool on which he stood twice a day to kiss mummy good morning and good night. He was so short, not much above her navel but they were such a loving couple that everyone envied them. That’s the long and short of my story!

Alamai Eienstein: My bawaji was over 6 feet tall! His good name was Dorabji Daver but everyone called him Rajabai Tower. He was very charitable and believed in the saying, ‘Parsi thy name is Chairy’. Whenever he ate mangoes, he gave all the gotlas to our next door neighbour, Gustadji Gotla. His wife Gooli Gotli used to bless him, saying, “Bawaji, jivta raho aney ghani ghani keri khata raho!”

Chaadan Chibavli Chakli: I come from a family of doctors – grandpa was a Vaid who also had knowledge of Yunani  medicine. He specialized in Motia (Cataract) in his village. He would hang the patient upside down from a tree – as a result, the eyes would bulge. Then with his magic-healing-hands, he would poke the eye with a thorn and remove the motia! He was known as Motia-Bawa, whereas my father is a physician who gets awards, nariyals and shawls from every corner of the world!

Homiar Hypochondriac: Arrey, every time I visit your Dad, I become more sick! He puts his stethoscope just above my navel to monitor my heartbeats and says grandly with a flourish, “Tamaru heart chalu chey aney dhoom-dhadakana avaaj avej. Very good!”

Freny Fatakri: Chaadan, once I sneezed continuously in your father’s dispensary but he didn’t diagnose it as flu. On the contrary, he asked me to stop sneezing and tell him what my problem was. Even his compounder told him, “Memsab ko sardi hua hai,” but he kept on asking me, “Tamara mohna maa jeebh nathi kay?”

Soli Shikari: My dad and grand-dad used to do shikar like the Raja-Rajwadas!

Abbhan Aban: They sat on elephants and shot lions and tigers in the jungle?

Soli: No! They lived in a bungalow in Thana which was like a jungle then. They would do shikar of rats and squirrels who would stray near their bungalow with air-guns!

Abbhan Aban: My family says they were not air-guns but Divali-par-toti-forwani toy gun. By the way, my dad was the headmaster in a Parsi school in Surat. Very strict. He had a zero-number-ni-patli-soti with which he would clobber his students. He used to say, “Soti vaagey chum-chum; Aney vidhya aavey dhum-dhum!!” It’s another matter that at home he got clobbered by mom who used the sapat freely on him!

Soona Sample: Kaya jamanani vaat karoj?  If he tries such stunts today, he’ll be in jail! Today, teachers are scared of being clobbered by the students!!

Jamas Jambooli: My behsti  father was in LIC in a very cushy job. He would sign the muster at 10:30 am and be at home at 11 to have his beer and sleep in his easy chair. At tea-time, he would go to the office canteen for tea and snacks and do a Salaam to his boss who was equally lazy. By 5, he and mom would go for evening walks hand-in-hand, like Jack and Jill. He had a dream job and always joked that LIC means ‘Live In Comfort’!

Tehmi Trim Tarak: My dad is so neck-deep in love with my mom that he buys her the most expensive cosmetics and even applies the foundation, powder, blush-on, eye-shadow, mascara and lipstick on her. He is very good at it and mom always says, “My Manek is my Micky Contractor!’

Piroj Pehelwan: My father has a collection of black-belts.

Polly Popat: He must be a Karate champion!

Piroj Pehelwan: Nahi re! He has a large waist-line, so they are all for keeping his pants from slipping down!

Polly Popat: My father’s into karate and always talks of Katas.

Meherbai: Just talk of Katas? Come to my kitchen and I’ll show you how many pure silver Katas and Chamchas we have! Just joking! I know what a Karate Kata is. You say Hoo-Haa, Shoo-Sha and threaten your opponent with weird hand-gestures.

Bomi Bevdo: I grew up without a father because my mom couldn’t  adjust with her in-laws and her mother encouraged her to live separately from my dad for 30 years! Mamaiji’s kelavni was rotten and even my maasi’s (mom’s sisters) had broken marriages. Today, in old age, mum and dad live together but it’s just for convenience and compromise. That is why, I live far away from them with my wife and kids but in my heart, I do love them.

Abbhan Aban: And, probably, that is why you became a Bevdo!

Gulshan Google: My father was most loving and couldn’t keep his hands off my mother. They always walked on the road holding hands, like newly-weds and called each other names like, ‘Chocolate, Lolly-pop, Barfi and Jalebi’! Actually, both were like chocolate – half sweet and half nuts!