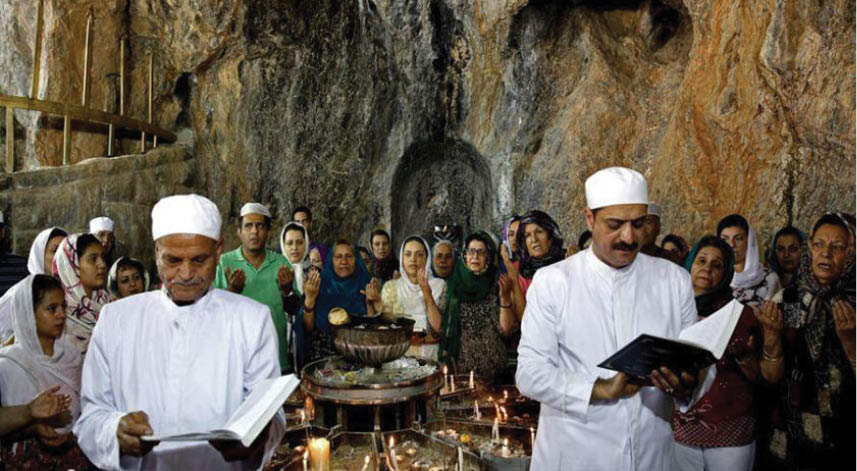 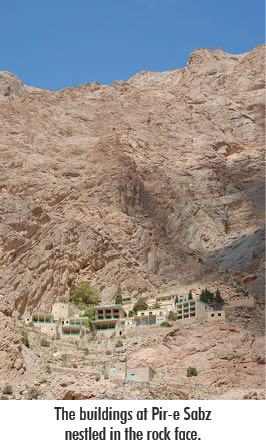 The Pir-e Sabz or Chak-Chak, an annual pilgrimage observed by Zoroastrians who come from all over Iran, and many places around the world as well, was celebrated from the 14th to 18th of June, 2019, at the mountainous fire temple which is embedded in a shallow cave in central Ardakan county, Yazd province – where the legendary ‘eternal flame’ is kept alive. While the word ‘Pir’ means a temple, the word, ‘Sabz’, means green; its alternative name, ‘Chak-Chak’, is said to be derived from the sound of the ever-dripping water in the cave (which contains the shrine), after which this pilgrimage site is named.

Located in a shallow cave on the side of a barren mountain, as per legend, Pir-e Sabz is dedicated to the princess Nikbanu (meaning: kind lady), the second daughter of the last pre-Islamic Persian ruler, the Sassanian king – Yazdegird III and Queen Hastbadan. Nikbanu was cornered by the invading Arab army. Fearing capture, she prayed to Ahura Mazda for protection and in response, miraculously a cleft in the mountain parted taking the princess into its womb. The rock face closed before the eyes of the bewildered Arabs, but not before a piece of her garment was trapped in the cleft of closed rock face. The piece of cloth petrified as a piece of coloured rock and was visible until recently. The waters that now emerge from the rocks and drip along the ‘cheeks’ of the cave walls are the Princess’ tears of grief. The course of the trickling water is lined with wisps of par-e siavoshoun or maidenhair fern, symbolic of the princess’ hair. Growing beside the holy spring is an immense and ancient tree said to be Nikbanou’s cane. 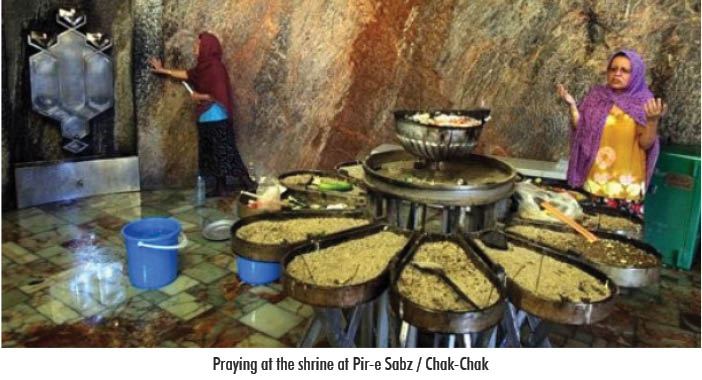 The actual temple of Chak Chak is a man-made grotto sheltered by two large bronze doors. The shrine enclosure is floored with marble and its walls are darkened by fires kept eternally burning in the sanctuary. Inside is a multi-petal candle holder that also holds plates of food offerings. In the cliffs below the shrine, are several roofed pavilions constructed to accommodate pilgrims. The pilgrims gather at the site to share in the princess’ grief, remember her and the lost Aryan empire, and pray in hope of a better future and to wish for the health and well-being of Zoroastrian followers. Tradition has it that pilgrims are to stop riding the moment they catch sight of the temple and complete the last leg of their journey on foot, to the entrance of the cave which is reached in two hundred and thirty steps.