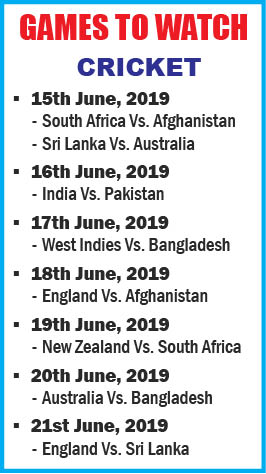 Portugal Wins UEFA Nations League: Hosts Portugal grabbed their second trophy in three years defeating the Netherlands 1-0 in Porto to win the inaugural Nations League. The victory was thanks to a goal from winger Goncalo Guedes. This makes Portugal the first European nation to host and win a final since 1998 World Cup (France).

India V/s NZ Match Abandoned Due To Rain: One of the most awaited clashes of the World Cup – India and New Zealand – was abandoned without the toss due to persistent rainfall at Trent Bridge, Nottingham, England. Both teams will share a point each. India now faces arch rivals Pakistan on 16th June, 2019.

India In World Archery Championship Final: The Indian men’s recurve team stunned hosts Netherlands 5-4 to reach the finals for the first time since 2005. The Indian team will be on the lookout for its maiden title as they face China in the summit clash on 16th June, 2019.