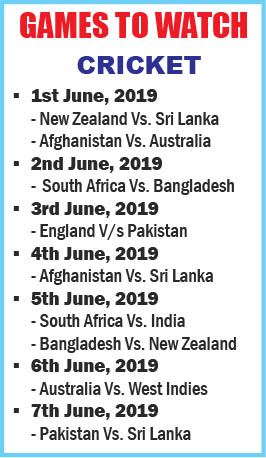 Ben Stokes great batting, 79 off 89 balls comprising nine fours ensured a win for host team England by a huge 104 run margin against South Africa in the opening match of the World Cup at Kennington Oval, London. Batting first, the Englishmen notched up a mammoth 311-8 in their 50 overs. Along with Stokes, Jason Roy (54), Joe Root (51) and skipper Eoin Morgan (57) contributed with the bat. Amongst South African bowlers Lungi Ngidi took 3-66, while Imran Tahir and Kagiso Rabada grabbed two wickets each. In reply, the visitors managed 207 in 39.5 overs as opener Quinton de Kock top scored with 68, followed by Dussen’s 50. For England, Jofra Archer scalped 3-27 in seven overs, Liam Plunkett took 2-37 while Ben Stokes picked 2-12 in 2.5 overs. Stokes was Man of the Match for his all-round performance.

Excellent batting by Man of the Match and skipper Prithvi Shaw (61*), and great bowling by Prathamesh Dake (3-19), Atif Attarwala (3-20) and Pravin Tambe (2-38) helped North Mumbai Panthers defeat SoBo SuperSonics by 12 runs to win the Mumbai Premier League 2019 at the Wankhede Stadium in Mumbai. Batting first, the Panthers notched up 143-7 in 20 overs. Amongst the SuperSonic bowlers, Deepak Shetty grabbed three wickets while Rohan Raje and Dhrumil Matkar picked two each. Parag Khanapurkar top scored with 43. Atif’s penultimate over and Tambe’s last over helped the Panthers seal a victory.

A brace from Eden Hazard during the 65th and 72nd minute which included a penalty along with goals from Olivier Giroud in the 49th minute of the clash and Pedro’s during the 60th minute helped Chelsea thump Arsenal 4-1 in Baku to win the Europa League. With this victory Chelsea have won five major European trophies including a champions League, two Europa Leagues and two Winner’s Cup.

17-year-old Indian shooting star, Manu Bhaker, lost out on a medal along with a quota place in the 25m pistol event due to double malfunction of her gun. But that did not deter her spirit as the next day, the teen sensation clinched a Tokyo 2020 berth in the women’s 10m air pistol final at the Munich World Cup. She landed fourth and missed the chance of acquiring a bronze medal by 0.1 point.

Rafa, Federer In Third Round of Roland Garros