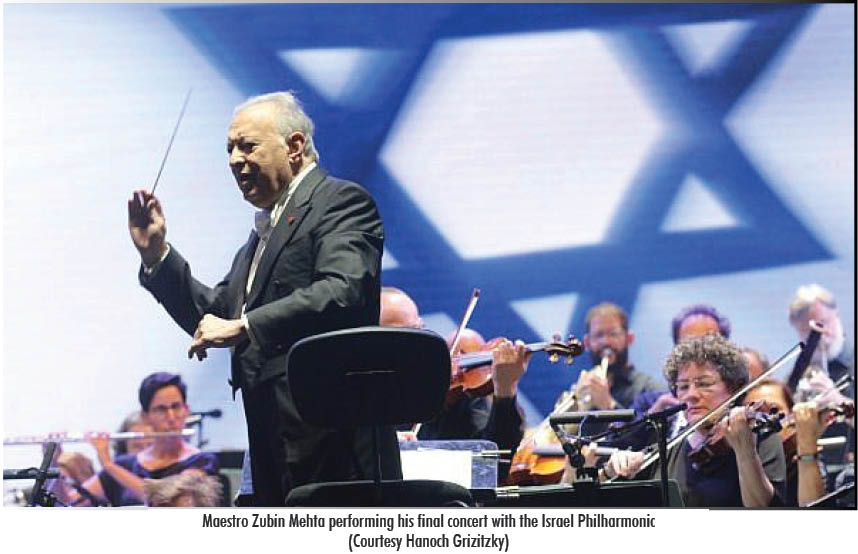 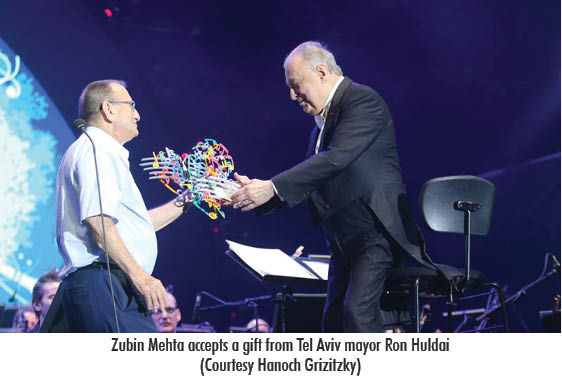 completion of his impressive 50-year tenure, as Musical Director of the world renowned Israel Philharmonic Orchestra (IPO), in Tel Aviv’s Yarkon Park. The grassy expanse of the Yarkon Park was filled with an enormous crowd of young and old, who rose almost simultaneously as the charismatic maestro took the stage, opening with the orchestra’s moving rendition of Israel’s national anthem, ‘Hatikvah’. Tel Aviv Mayor, Ron Huldai, noted that Zubin Mehta had written part of the history of the State of Israel, lauding him as “the crown jewel of Israel’s cultural life.”

“When I started my work in Israel, all the members of the orchestra were twice my age, and now everyone is three times younger,” joked Aapro Zubin Mehta, recalling his debut with the IPO in 1961. Mehta successively became the IPO’s Musical Advisory (1969), Musical Conductor (1977) and Director for Life (1981).

His skills were still on display at Saturday night’s performance. Over the course of his long career, Mehta has continuously been praised by critics for his precise and subtle hand gestures, which exert the utmost control over any orchestra he conducts. This has not changed with age: the two big screens on both sides of the stage let the public view the gentle and vigorous sides of the maestro’s body language, which immediately translated into magical musical moments.

There was a thumbs up and smile on Mehta’s face as a spontaneous compliment to one of his many capable players produced cheers from the audience — evidence of the rapport between Mehta and his colleagues.

Befitting Mehta’s expertise in the operatic world, for his farewell, he invited a stellar cast of internationally acclaimed singers, who are also currently on tour with the maestro with performances of ‘Verdi’s Requiem’, at the International Convention Center in Jerusalem, and the Charles Bronfman Auditorium in Tel Aviv. During the farewell, American soprano Mary Elizabeth Williams, Russian mezzo-soprano Olesya Petrova, American tenor Gregory Kunde and Moldovan bass Oleg Tsybulko gave a glimpse into the vocally challenging world of arias by Puccini, Gounod, Verdi, Gershwin and Rossini.

The celebration concluded with an impressive display of fireworks over the skies of Tel Aviv. (Courtesy timesofisrael.com)

Born during the British Raj, on 29th of April, 1936, to Mehli and Tehmina Mehta, Zubin Mehta’s father was the founder of the Bombay Symphony Orchestra, and from him, Mehta received his early musical education. Zubin graduated from the Vienna State Music Academy with a diploma as a conductor. He began winning international competitions and conducted the Royal Liverpool Philharmonic at age 21.

Mehta received praise early in his career for dynamic interpretations of the large-scale symphonic music of Anton Bruckner, Richard Strauss, Gustav Mahler and Franz Schmidt; His conducting is renowned as being flamboyant, vigorous and forceful. Mehta’s life has been documented in Terry Sanders’ film, ‘Portrait of Zubin Mehta’. Mehta has also played himself as the pivotal figure in ‘On Wings of Fire’, a 1986 film, about the history of Zoroastrianism and prophet Zarathushtra.

The Government of India honoured Mehta in 1966 with the Padma Bhushan and in 2001 with India’s second highest civilian award, the Padma Vibhushan. In September 2013, President of India, Pranab Mukherjee, awarded him the ‘Tagore Award’ for his outstanding contribution towards cultural harmony.

Zubin Mehta is a permanent resident of the United States and retains his Indian citizenship. Zubin, along with brother Zarin, constitutes the Advisor Council of the Mehli Mehta Foundation.