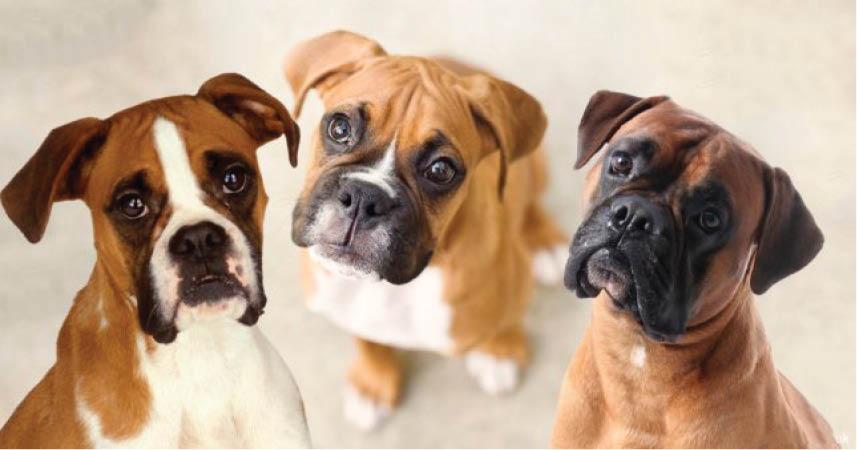 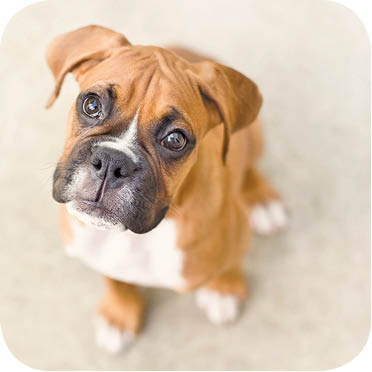 The Boxer is a handsome, loyal, family companion and one of the most exuberant breeds around. Highly valued as an affectionate pet and guardian of home and family, the breed was developed in Germany by crossing the mastiff-type Bullenbeisser with the English bulldog. Beisser dogs were used by the Germans to hunt down wild boar and other game. The powerful dogs used to leap up and clamp down on their prey and hold on till the hunters arrived. Some breed enthusiasts suggest that this could be the reason for the dog’s undershot jaw and its tendency to leap up onto people – albeit in a friendly manner.

The Boxer probably got its name from the habit of beginning a fight by standing on its hind legs and boxing with his front paws. Developed as a working dog in Germany, the boxer was one of the first breeds in Germany to be trained as a police dog. The dog’s courage and strength got them jobs during the two World Wars as sentries and messenger dogs. Today, the Boxer is valued as an intelligent and playful companion.

The Well Built Athlete: The sporty Boxer is a muscular, smooth-coated, sturdy dog – a powerhouse of energy. The breed has a short back, strong limbs and a short square muzzle with a protruding lower jaw and facial wrinkles. His well-developed muscles are hard and appear smooth under taut skin. Many boxers, especially those that participate in conformation shows, tend to have docked tails and cropped ears; though many countries have banned the cropping of a dog’s ears and docking of its tail. The dog may be fawn or brindle with white markings; according to the AKC standard for the dog, the white markings on the dog should not occupy more than one-third of the boxer’s coat. White, mostly white, and black dogs are disqualified from the conformation ring. The bias against too much white on the dog probably began in World War I, where many Boxers served on the front lines. White made an easy target for enemy snipers. The dog’s dark soulful eyes combined with the wrinkling of the forehead, gives the Boxer head its unique quality of expressiveness.

A Clown On Four Legs: “Living with a Boxer is like having a young kid in the house,” states Veera Mehta, an avid Boxer fan. “They are so human in their expressions and character, and the devotion they show the family is amazing. It is a delight to live with a Boxer.” And, like children, the dog adores getting attention and dislikes being kept in a kennel or isolated from his family. The Boxer is a clownish, playful dog that gets along well with kids; yet the breed’s boisterous nature does not make it the ideal pet for homes that have toddlers. 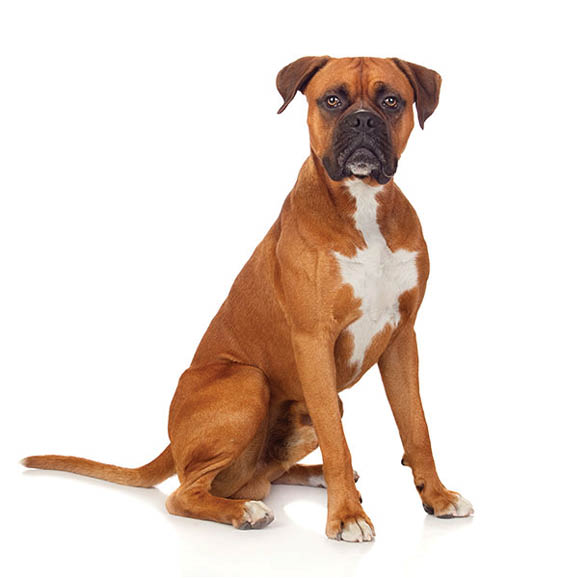 The ideal Boxer is friendly, dignified and even tempered. Aggression, extreme shyness and hyperactivity are unacceptable in the breed; those who are considering this breed should insist on checking the temperament of the parents for these undesirable traits before even looking at the puppies.

The Boxer tends to be a highly underestimated dog. The dog is a delight to live with and is known for its loyal and steadfast nature. The exuberant dog needs plenty of exercise and playtime to keep him out of trouble; and so the breed is not for people who want to lead a sedate life. Noted for its courageous nature, the dog is natural at guarding and protecting his family. “For all his exuberance and enthusiasm, Bronco is the perfect gentleman when he is interacting with my aged mother,” insists Veera. “The breed is so intuitively clever that they just sense a situation and adapt to it. Living with a boxer is truly a life-changing experience!”

The Multi Purpose Dog: The boxer, over the years, has been used as a hunter, fighter, guard dog, war dog and even a circus dog, but his main job, today, is to be a companion and protector to his family. Innately clever, the dog must be trained at a young at age to keep him from getting control over the home as he matures. The dog’s exuberance and enthusiastic nature can be a nuisance – especially when it jumps on guests; the boxer must be taught as a pup to greet people by sitting.

Daily exercise and playtime is vital to keep the dog out of trouble and even tempered. Boxers that are deprived of adequate exercise or play with a human, tend to be highly strung or destructive. “Boxers have a lot of energy and you must be prepared to give them the physical and mental exercise that they need,” suggests Tanya Patel who is absolutely devoted to the breed. “They are extremely loving dogs, great with children and can be a wonderful addition to the family.”

The Healthy Boxer: Full of energy, the dog needs plenty of exercise and play to stay in shape. Its short, sleek coat is easy to maintain with regular brushing and rubdowns with a chamois cloth. The blunt muzzle makes the breed intolerant of hot, humid conditions and can cause wheezing and snorting. Due to its short coat, the dog is intolerant of extreme temperatures and owners should keep the dog from over-heating in summer or freezing in winter.

Unfortunately, the Boxer is prone to several potential health problems, including hip dysplasia, Monorchidism (the failure of one testicle to descend into the scrotum), digestive problems (including gastric torsion), cardiomyopathy (a weakening and eventual degeneration of the heart muscle that results in sluggish blood flow and generalised congestive heart failure), hypothyroidism, and cancerous and benign tumours. Some white boxers are also genetically prone to deafness. However, the incidence of these diseases is not high, and buying from an ethical breeder improves the chances of getting a healthy pet.

Overall, the boxer is a genial and wonderfully exuberant dog. Noted author, Mathew Cowley, in his article, “Canine Clowns,” best summed it up with, “A boxer is all that is good in a dog. He is a laugh a minute, lives life to the fullest, a maximum velocity version of canine slapstick. But he is also a sympathetic soul, a shoulder to cry on and a confidante.”