This film, which lost out to last year’s Cannes winner, ‘Shoplifters’, is a riveting tale of love, sacrifice and life in North-west China, near Mongolia, at the turn of the century. Local gangster Bin (Liao Fan) is reluctantly pushed to the helm of affairs after his boss is bumped off by rivals. Bin’s moll Qiao (Zhao Tao), a retired coalminer’s daughter, runs Bin’s mahjong den and his affairs in his absence. A sudden, and almost fatal ambush on Bin one day, by young turks of a rival gang, makes the quick thinking Qiao reach for Bin’s illegal pistol to fire shots in the air to frighten and scare the gang into fleeing. After emerging from prison after five years for possession of an illegal weapon – having taken it upon herself – she goes in search of Bin, who’s not only not kept in touch with her, but forsaken her. The passage of time gives him a fresh lease of life, besides a new girlfriend.

In APW, director and master storyteller, Zhang-ke (A Touch of Sin, 24 City) rekindles his fascination for  depicting the dark underbelly of China. While underworld ethics, or the lack of it, form the crux of the story, Qiao’s diverse personality are beautifully captured by cinematographer Eric Gautier, who’s replaced Zhang-ke’s regular cameraman Yu Lik Wai. After her release, Qiao’s attempts to eke out a living as a conwoman (“I’m her sister, she’s had a miscarriage”) and trying to reconnect with Bin forms the core of the film. Both the lead pair, Liao Fan and Zhao Tao, especially the latter, who’s also the director’s partner, give standout performances. 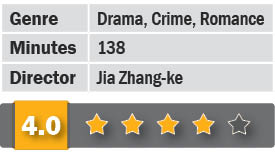 YMCA, the cult song by The Village People, merges well with the onscreen portrayal of the gangsters. Another sublime moment in the film is when Qiao, after emerging from prison, sails down the Yangtze river in the Three Gorges dam area.  Along with ‘Shoplifters’, a not-to-be-missed film.