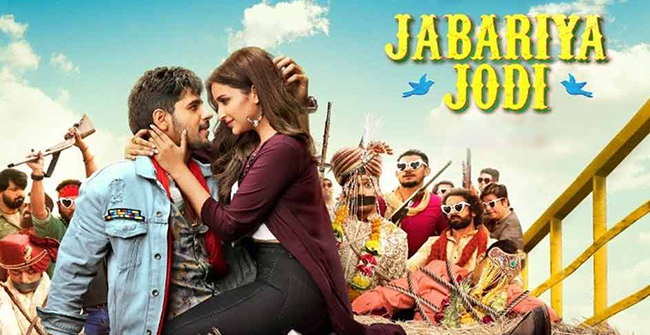 Set in Madhopur, Bihar, in 2005, with joints having names like ‘Murgh Donald’ and ‘Shotgun Shaadi Band’ (the film, incidentally, was initially titled ‘Shotgun Shaadi’) abound in this unending drama of forced marriages from the girl’s side (for a change), in cases where exorbitant dowry is demanded.

Hukam Singh (Javed Jaffrey), who specializes in such coerced marriages, lives in a palatial house so vast, Buckingham Palace would seem like a miniature mansion! Childhood sweethearts Abhay (Sidharth Malhotra) and Babli (Parineeti Chopra) reunite – Babli’s family had relocated to a city – after more than a decade. Sparks fly again, but this time it’s more from Babli as Abhay (Hukum Singh’s son) is more eager to enter politics. What follows later and who forces whom into marriage forms the crux (crust would be a better word) of the almost two-and-a-half-hour film.

Dialogues such as ‘Ram nahi Haldiram’ and references to Bappi Lahiri and Jatin-Lalit evoke genuine laughter and saves the film from being a washout. The lead pair is most unconvincing – – while Malhotra looks too goody to pass off as a gangster, Chopra’s ultramodern outfits look out of place in a small town setting. Sanjay Misra as Babli’s sleepwalking father and Gopal Dutt (The Week That Wasn’t) as sub-inspector Tiwari on the take give standout performances. Aparshakti Khurana is good but runs the risk of repetition in almost every film. Brand endorsements are too overt and the film deteriorates into a mishmash quite often. In the guise of a social message, director Prashant Singh has collaborated with (or should one say abetted?) Dev Rao Jadhav, who’s credited with the story and screenplay.