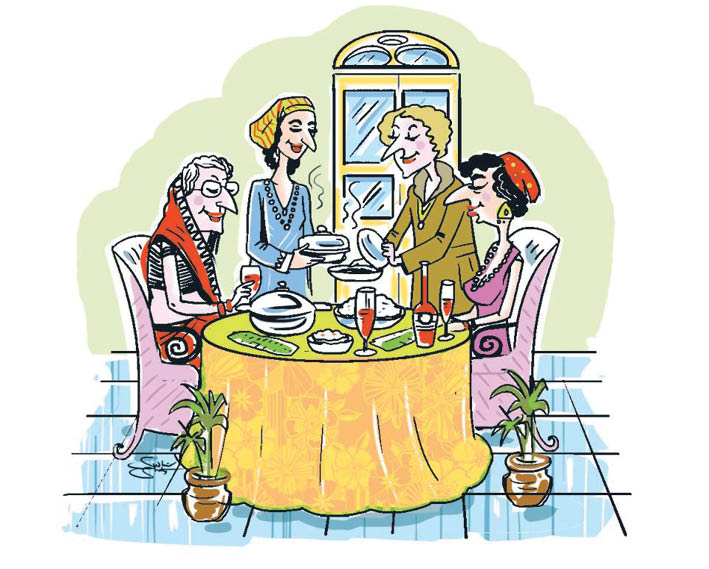 Koomi Kaajwali: Mehri, don’t fall into Ketu’s trap. She wants you to over-order, so she can take the left-overs home like everytime!

Ketayun: I’ts Parsipanu not to waste food and keep some for the dog (kutra-no-buk). That’s why I always insist on a doggy-bag for the leftovers.

Meherwanji: But you don’t have a dog!

Ketayun: I give it to my husband so I don’t have to cook the next day! Then, easy-chair par besi ney lamba tatya!

Banoo Batak: In Ketu’s case, hubby or doggy – all is the same. In fact, she’s kinder to the strays she feeds!

Alamai Eienstein: Real Parsipanu was in my maiji’s time, when women in the house maintained total chokkhai. Maiji would go around the house with loban, which everybody bowed to. Today, that’s all gone for a toss!

Modern Mani: All that was ridiculous!

Alamai: No, my dear! That was also Parsipanu.  Roles were well-defined in a marriage – hubby earned and wifey kept house, cooked and raised children. Mind you – Mamaiji had ten children of which only five survived. Today’s couples wait till motia-batrisi time to have their first child and then dump the poor kid on ayahs or grandparents!

Soonamai Sample: Having children and taking responsibility of raising them is natural but there’s only one highly educated community in the world that needs Jiyo Parsi’s help, Government’s help and UNO’s help to teach people how to marry and have kids – as though it’s a herculean task! Why have we come to this?

Romantic Rutty: A few decades ago, a Parsi couple would have three, four or even five kids!

Bomi Bevdo: Kids grow on trees or what? To have kids, one has to marry and who wants to marry today? Where are the nice girls? The Fatakris? 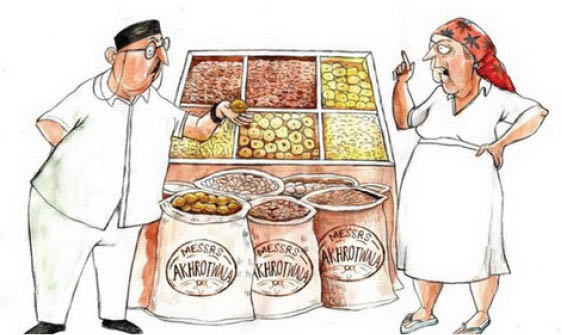 Themi Trim Tarak: And where are the nice boys? The paisawala Fatakras?

Bomi-Bun-Pao: Trouble is, both boys and girls have too many nakhras. They waste years and after their expiry-date, they are left on the shelf to lead a lonely middle age. Thing is, every girl wants a dynamic peera bal valo petrol pump (Donald Trump) and every boy wants kakri-na-kake (Katrina Kaif).

Chatpati Chandan: Everthing will change now for the better… Parzor Foundation has started a Parsi matchmaking portal in association with shaadi.com.

Aloo & Jaloo (the obnoxious twins): Arrey wah, you’re so clever! By the way, we two are only 65 years old kavli-kacchi-kumari – most eligible girls and you can choose one of us for matrimony.

Baji-Buccho: My mummy says I’m too young to marry and if I marry, who takes care of her?

Baji Buccho: All the non-Parsi girls in my office have their eyes on me and are willing to take care of mummy but Maiji won’t hear of a parjat vahu!

Cyrus the Virus: Havey javaa dey! Every other Parsi is marrying a non-Parsi girl who has no nakhras and knows how to ‘belong’ to their in-law’s family and do seva! But I must say that what Jio Parsi is doing is very good – influential people in our community are giving their valuable time and effort to do something positive!

Aspi Aspro: Forget boys, every other girl is also marrying a non-Parsi – she would rather marry a donkey driving a BMW than a self-made-middle-class Parsi in a Nano. But our Parsi Matrimony site and the Jiyo Parsis are on the right tract and hopefully, it should make considerable difference in the future!

Meherwanji: Our Parsi ladies of yore used to cook delicious meals. My Meherbai still does, asking me aajey su banau? Su gamsey khava? But all my nieces either rely on cooks, tiffins or Swiggy! No wonder their husbands are sickly and le-le-gur-gur!!

Dukhi Dolly: Don’t say ‘cooks’ or I’ll come out in a rash. I made the mistake of employing a young Manglorian cook and from that day, my Dolla started taking her name while praying Tandarosti and saying silly things like, “khodaiji philomena ney hamarey mathey jeevti rakho. joiye toh dolly na averda phelomena ne apjo!” After these daily nataks, I sacked Philomena and Dolla ran three floors down after her, right till the Cusrow Baug gate, crying, “Philo, don’t go, Philo, don’t go, bhukhmara parsey – I’ll die of starvation!”

The boys at the gate had a good time watching the tragic Parsi Opera. Dolla made a jackass of himself and I stopped my morning walks in Cusrow Baug as everyone was asking, ‘What happened? Su thayu??”

Sammy Six-Pack: My mother and aunts wore a mathabanu all day and today even some goranis (Dasturji’s wife) don’t wear it. So much for Parsipanoo!

Pessimistic Pesi: Forget mathabanu, my grand-children don’t wear Sadro-Kasti! They don’t do their morning or night Kasti or any sort of prayers. My wife and I go to Agyari daily. How do you think we feel? I have become as angry as Soil Singham – Ataa Mazee Satakli!

Gooli Gol-Gol: My grandchildren don’t know how to read, write or speak Gujarati. When the mother-tongue is lost, Parsipanu is lost! The German Nazis ploy was, ‘When you want to kill a community, kill their mother-tongue first.”

Homi Historian: Put your chins up Gooli, both of them – even the double-chin. We Parsis boast of 100% literacy. We have thrown up the best doctors, lawyers, scientists, musicians, writers and engineers enhancing India’s trade, commerce and industry with enterprise, charity and public-spirit. We have maintained our national-consciousness as loyal citizens of India. Truly, we have blended like sugar in milk!

Alamai Eienstein: Arrey, the milk has gone sour now! Doodh faati gayu! Don’t live in the past. Where are the brilliant professionals today? Why are you always resting on past laurels? Revive Parsipanu, which is our identity, ethnicity and our roots. Cut off the roots and the tree dies.

On this note, the Mandli feasted on the varieties of fish and Ketayun Khadhri took home all the left overs in her doggybag (err.. hubby bag?!)