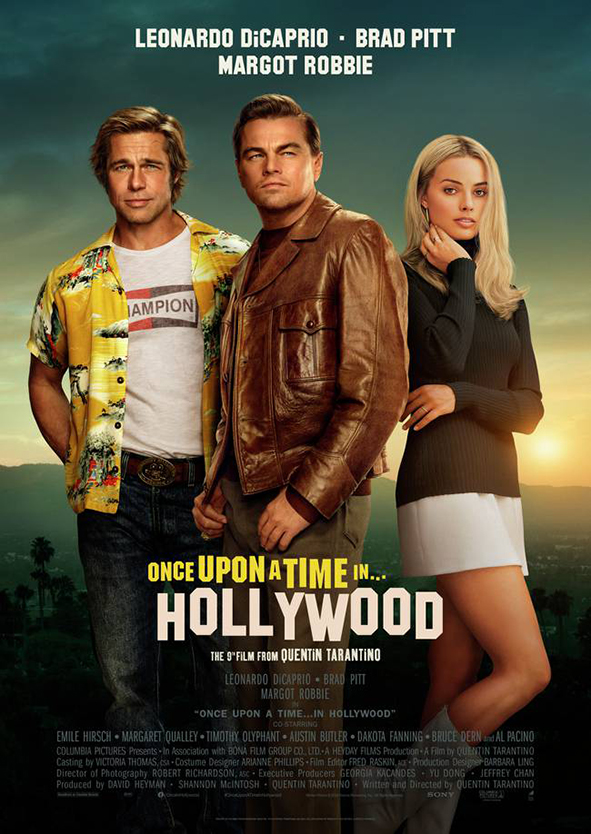 A fictional film is the setting – and the excuse -for cult director Tarantino to direct his ninth feature film. Leonardo DiCaprio as past-his-prime Hollywood actor of the 50s and early 60s Rick 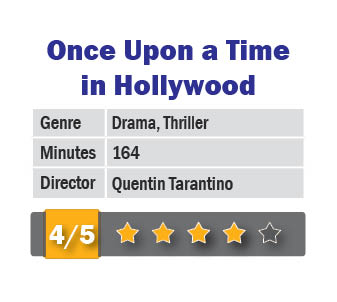 Dalton, and Brad Pitt as Dalton’s stunt body double, chauffeur and handyman Cliff Booth come together for the first time in the famed director’s retro film of the late 60s.
Dalton is compelled to take whatever roles come his way, for his own sake as well as for Booth, who’s financially dependent on the former and who lives in a trailer adjacent to Dalton.
The milieu of ‘Once Upon a Time in Hollywood’ is of the horrific Charles Manson Family murders in 1969 which included actress Sharon Tate (Margot Robbie in the film) wife of director Roman Polanski (Rafal Zawierucha). Tarantino, in the film, builds up the story in his own inimitable style and the climactic scenes will leave the viewer – well, let’s leave it at that.  The film opens with an interview of Dalton and Booth and the viewer is handed a brief primer on stunt doubles. Dalton had starred in the Western TV series Bounty Law, and we are given a healthy dose of the genre. Backlots of the studio are liberally shown. Steve McQueen, Burt Reynolds and others are represented by actors in the film. Some of the best moments are the scenes with the eight-year-old Trudi (Julia Butters) and Mike Moh, as Bruce Lee.
On the flip side, when Dalton announces ‘I’m not the best anymore’ (tacitly admitting that he ‘was’ at one time), one is taken aback as DiCaprio just doesn’t look an aging, has-been actor.
The set decoration by Nancy Haigh, with brands, dining establishments, film posters and movie theatres of the era is worth more than a mention. Arianne Philips’s costumes are a throwback to the 60s.
Want to see the Hollywood scene of the time? Watch the film to witness the Golden Age of Hollywood and its gradual decline.