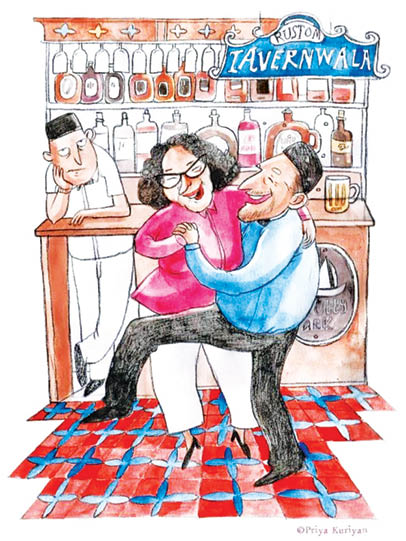 Laugh and be merry together, like brothers akin,
Guesting awhile in the rooms of a beautiful inn,
Glad till the dancing stops, and the lilt of the music ends.
Laugh till the game is played; and be you merry, my friends. 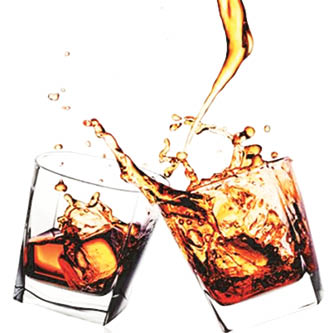 A Parsi is an epicure, loving the good living and his millennia old Zoroastrian teachings enjoin him to enjoy life, albeit in moderation. This is a part of his Parsipanu! Those were the days when, after a day at work, hard, or otherwise, a pater familias and the other lesser familias (the families were large then) would relex on those huge easy-chairs (houses were large too) with a hole at the end of an armrest to hold the glass between the seeps. It was the happy hour. There would be a small table by the side popularly known to Parsis as ‘teapoi, teapai’, with a decanter containing the relaxing fluid sparkling in the light. Tehmina, Jaiji, Soonaiji, Daulatbanoo and an assortment of maijis and baijis would be sitting by the side probably sipping something equally strong or of lesser authority like sherry or port and munching away fried sukka boomla, or sev-gathias or patties from Kayanis! Then off to the table for a hearty meal of tomato, potato or bhida-per-eeda and masoor ma bookka, onions in vinegar and a huge chunk of jaw-breaking, gor-papri to end the meal!

Today the scene is different. The poor blighter, pater of a tiny familia or pater familiae de minima (God forgive me of my Latin) comes home in a local train packed tighter than the corseted waist of Scarlet O’Hara in ‘Gone With The Wind’, or driving for two hours in the endless, abysmal traffic to cover ten kms! This guy needs the refreshing three-fingers-full more than his Papa or Grand-papa ever did. Truly! Lordly was the life his papa or grand papa lived. ‘O for a beaker full of the warm South… full of the true, the blushful Highland Cream!’ (My apologies to poet Keats!)

Of course, he reaches for Highland Cream, but it’s not the same as it was during the time of his honorable ancestors… the camaraderie of the large family is absent, and dinner is often a pizza or burger or something equally inane ordered over some unemotional App! That is what his indifferent offspring wants. This meal can never substitute aapru Parsi cuisine, a hearty meal of something-or-the-other-per-eeda or almost anything-ma-gosh.  As far as this writer is concerned, be it ever so humble, there is nothing like gher-nu-bhonu, washed down with ‘beaded bubbles winking at the brim’, in a tall, frosty glass.. taken in moderation.

I’m an archetype of those who belong to the proud old pageant of Parsis, way before the term, ‘Parsis’ came into existence! Back to the times of King Jamshed of the Peshdadian Iran, when the great King introduced wine, giving it the dubious cognomen of ‘dava-daru’ – wine with medicinal properties. There is nothing hedonistic about us. We simply enjoy the bounties of Dadar Ahura Mazda! Parsis have marched through the ages drinking wine, in moderation of course, but wine, less-as-dava and more-as-a-daru.  Imbibing different fire-waters or eaux de la vie, (the waters of life as the French lovingly call them) brought in by various kings through their various conquests in Asia and Europe.

Post-landing in our new home in and around Sanjan, we continued to imbibe local liquor made from various fruits, especially the madhuca longifolia, better known mahavra or mahuva-no-daru, a drink treated with great reverence by the old-timers even today. The advent of the British brought us Brandy and Cognac – the preferred drinks of the British middle-class. In India, it was drunk with soda. Parsis too loved their Brandy or barandine as my granny used to call it. It was the panacea of all illnesses, especially if imbibed with a splash of hot water with honey! Often, my pretentious sore throat or cold and cough was rewarded with a small tot of John Exshaw or Hennessy barandine and hot water… as a sort of Academy Award for my convincing performance!

After 1880, Whiskey became popular because of the outbreak of a pest phylloxera that destroyed European vineyards, leading to an acute shortage of brandy.  Distilled alcohol, poetically called Aqua Vitae i.e. the water of life in Latin was literally translated to Irish as uisce beatha, which In turn  was Anglicised and corrupted into Whiskey or Whisky.  Whisky produced in Scotland is Scotch whisky or simply Scotch. It is the only product in the world that is known by the name of the country that produces it. In the famous New-Year-eve-song ‘Auld lang syne’, poet Burns mentions “we’ll take a cup o’ kindness yet.” The cup he is speaking of is whisky. The word ‘whisky/whiskey’ is one of the fifty words of English that can be understood anywhere in the world. When I was growing up, the favourite brands of whisky amongst Parsis were Johnny Walker, Black and White, White Horse, White Label, Teachers, Old Smuggler, Dimple and Vat 69, all excellent blended Scotch whiskies. Soon they went out of the budget of middle class imbibers and the ‘Indian Made Foreign Liquor’ was adopted – popular brands being ‘Solan No.1’ and ‘Black Knight. Today’ snooty drinkers prefer Single Malt Whiskeys. One must have a taste for that… and a wallet too. 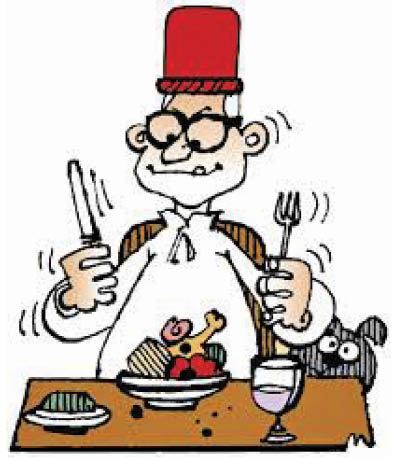 Celebrating festive occasions with drinks is almost mandatory amongst us Parsis. Salamatis (toasts) are proposed according to different occasions.  There was a time, when during the wedding banquet, six toasts were proposed, as: 1) Yazdan ni yaad (in remembrance of Paak Dadar Ahura Mazda); 2) To the health and well-being of the married couple; 3) To the sacred Fire-Temples; 4) To the health of guests attending the function; 5) To the host; and 6) To His Majesty, the King Emperor (no longer relevant). The salamati normally started with, “Lev saheb-o, yazdan ni yaad ma” or “Lev-saheb-o, aye punta jhora-ni salamati!” Glasses were raised, drinks were downed and probably refilled for the next toast!

The gift of dava-daru as given to us by King Jamshed the Peshdad is just a frivolous part of Parsipanu but no doubt a very enjoyable one. Parsipanu goes much, much deeper with strongly entrenched roots in the triad – ‘Humata, Hukhta, Hvarastra’. Parsis have been variously described as “the microscopic fragment of the mosaic of India” and “the noble debris of the most heroic and grandest people of antiquity.” Gandhiji said of us, “In numbers Parsis are beneath contempt, but in contribution, beyond compare”! Our intellectuality, our sense of fair play, our inclination to side with or help the underdog, our culture, energy, enterprise, organizing ability in tandem with clean living, adaptability and our capacity to create wealth and use it for the good of our brethren, are the more serious aspects of our Parsipanu, as is our penchant for eating, drinking and being merry. Our ability to laugh at ourselves, our own follies and foibles is a very important part of Parsipanu too!

View all posts by Dara Khodaiji →