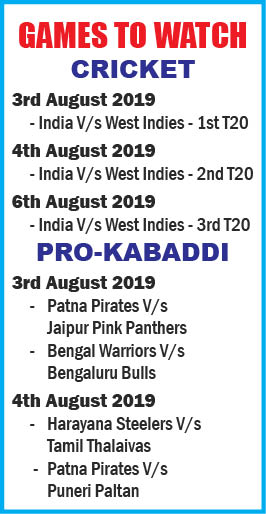 Lankan Lions Whitewash Bangladesh: Sri Lanka defeated Bangladesh by 122 runs in the third and final ODI to grab the three match series with a 3-0 win, at R Premadasa Stadium, in Colombo. During the third ODI, batting first, Sri Lanka notched up 294-8 in their 50 overs. Angelo Mathews top scored with 87 while Dimuth Karunaratne and Kusal Perera contributed 46 and 42 respectively. For Bangladesh, Shafiul Islam grabbed 3-68 in 110 overs while Soumya Sarkar picked 3-56 in his nine overs. In reply, the Bengal tigers managed only 172 in their 36 overs thus handing Sri Lanka another massive victory. Soumya Sarkar scored 69 while Taijul Islam remained unbeaten on 39. Dasun Shanaka snared three wickets while Kasun Rajitha and Lahiru Kumara picked four wickets amongst themselves. It was a day to remember for Sri Lanka’s Kulasekara as he was given a fitting farewell for a spectacular career in white cricket. Angelo Mathews was awarded the Man of the Match and the Player of the Series.

Prithvi Shaw Suspended For Doping Violation: Indian cricket’s young gun, Prithvi Shaw was suspended for eight months for a doping violation, the BCCI said in a statement. Prithvi apparently ingested a prohibited substance which can be commonly found in cough syrups. His eight month period of ineligibility will be deemed to have started from 16th March to 15th November, 2019, according to the press release.

Praneeth Advances in Thailand Open; Nehwal, Srikanth, Kashyap Out: Saina Nehwal was unable to put her best foot forward and was knocked out in the second round of the Thailand Open 2019, losing to 17-year-old Sayaka Takahashi: 21-16, 11-21, 14-21, in 48 minutes. Kidambi Srikanth crashed out after losing to Khosit Phetpradab: 21-11, 16-21, 12-21, in the second round. In another contest, Parupalli Kashyap was also knocked out after losing straight games 9-21, 14-21. However, Sai Praneeth stormed into the last eight round with a 21-18, 21-19 victory v/s Shubhankar Dey.

On 29th July, Patna Pirates beat Tamil Thalaivas: 24-23; Bengal Warriors overpowered Puneri Palatan grabbing a 43-23 victory. 31st July saw Jaipur Pink Panthers edge out Haryana Steelers 37-21; UP Yoddha got the better of U Mumba with 27-23. On 1st August, Gujarat Fortunegiants were the better team on the given day, snapping a win with 31-26, against rivals Dabang Delhi.