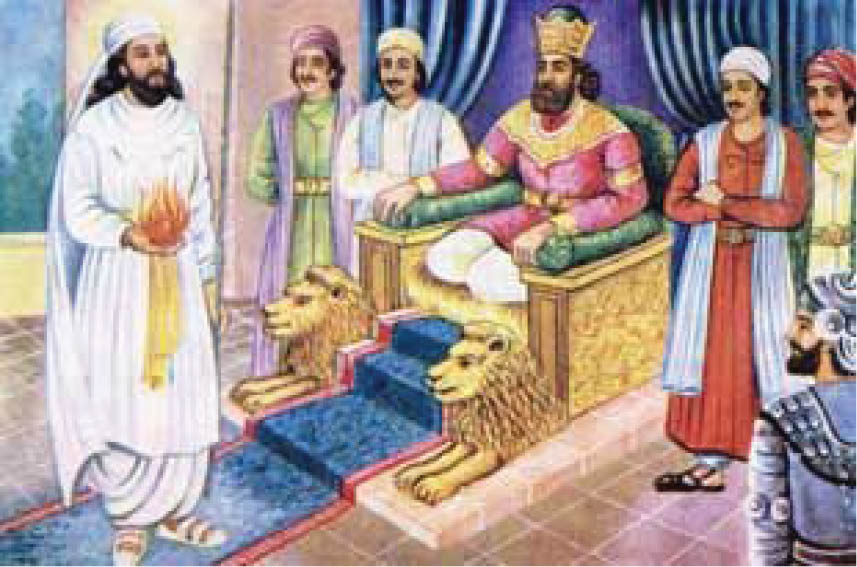 Daisy P. Navdar is a teacher by profession and a firm believer in the efficacy of our Manthravani. She is focused on ensuring that the deep significance of our prayers is realized by our youth. She credits her learnings and insights, shared in her articles, to all Zoroastrian priests and scholars whose efforts have contributed towards providing light and wisdom for all Zarthostis.

In the court of the Kayanian King Vishtasp, Zarathustra occupied an exalted position. He was made to sit on a special throne, next to the King himself. This invited the jealously of the other courtiers of the court of Vishtasp. They hatched a plot, wherein they proved Zarathustra to be an evil wizard who practiced black magic. The King had him imprisoned.

Zarathustra spent his time in prison deeply immersed in his prayers and continued his devotion to Pak Dadar Ahura Mazda. One day, he heard about how the most beloved horse of King Vishtasp, Aspe Siyahi, had contracted a mysterious ailment. The four legs of the horse were embedded into the stomach and the animal was in great pain – he could not stand. In desperation, the King had sought every remedy but nothing was working for the poor animal.

Then, Zarathustra sent a message to King Vishtasp that he could cure Aspe Siyahi. The horse was brought into the court and in the presence of all, Zarathustra recited the Yatha and asked King Vishtasp whether he would denounce all the fake gods and follow the Mazdayasni Zarthusti Din. When King Vishtasp agreed, one leg became free. Zarathustra again recited the Yatha and then posed the same question to the Queen who also agreed, and the second leg was healed. Next he posed the question to the ministers and then the courtiers who all agreed and Aspe Siyahi was cured. He stood up on all four legs, miraculously revived by the manthra of Zarathustra.

This story is old and one that we probably heard as children. However, just like the Bible which is full of parables, the Jataka tales which are full of learning and other sacred stories from various ancient texts, this story also has a lesson for us. The literal translation of the phrase, ‘Aspe Siyahi’, means black horse. We all have a slightly crippled incapable black horse inside of us. It is our mind which is frequently incapacitated by our doubts, our fears and our insecurities. We find it difficult to progress due to this black horse. In this story, once more Zarathustra brings to light the power of the manthra. It is the recitation of the manthravani and only that which helps us to stand and lead a life of purpose and fulfillment.

Not only is this my observation, but also my experience that when we are assailed by difficulty and doubt, it is the recitation of our sacred manthras that can heal and help us. A simple Yatha is all powerful!