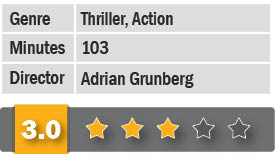 It took the intervening three films for First Blood to transform into Last Blood. And the generation gap is as much pronounced when Gabrielle (Yvette Monreal) tells her foster-father, John Rambo (Sylvester Stallone, of course), “Nobody writes letters any more.” Gabrielle drives from their ranch in Arizona to Mexico, when she receives a tip-off that her biological father, who had deserted the family, has been located there. Instead, she’s pushed into the hands of a cartel, led by Martinez and Vito (Sergio Peris-Mencheta and Oscar Jaenada) who’re into the flesh trade.

Stallone, who’s come to epitomize the Rambo franchise (no less popular than Rocky) drums up the revenge quotient in his fifth outing as the one eternally wronged. As in the earlier four, retribution is writ large on his face and woven into the skin of his character. Written by Mathew Cirulnick, along with Stallone himself, the story makes no attempt to mask the septuagenarian’s age. Stallone was almost half his present age of 73 when the first in the series was released in 1982. In Last Blood, he’s now without the trademark long hair. He’s constantly popping pills, perhaps to cool down his raging and fiery temper.

Before muscling into the goons’ stronghold, Rambo receives the customary thrashing, and is almost left for dead before being rescued by a mysterious woman Carmen (Paz Vega). What follows is sheer carnage – probably the most brutal, gruesome and savage of all Rambo films. It’s as if Rambo is aware that as a senior citizen now, he would receive immunity! ‘Last Blood’ could well have been titled ‘Lots of Blood’.