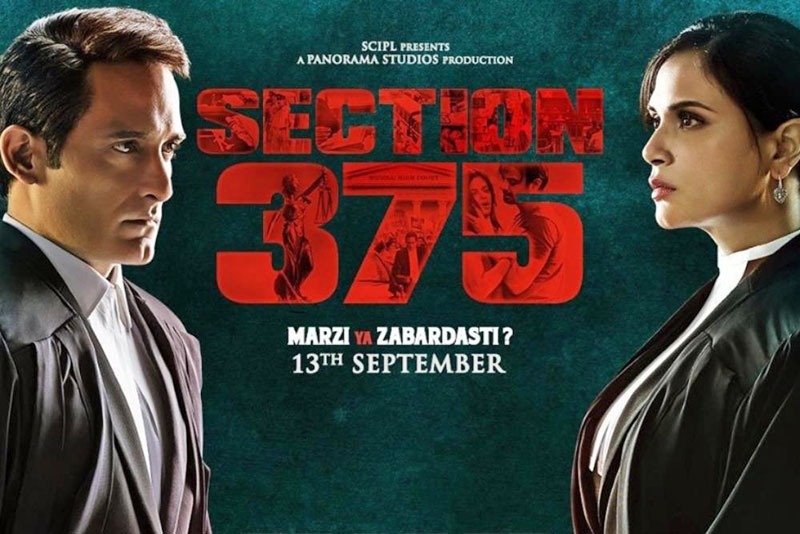 “Never fall in love with the law”, warns senior criminal lawyer Tarun Saluja (Akshaye Khanna) while delivering a guest lecture to law students. This scene quickly turns to a film set where well-known but domineering director Rohan Khurana (Rahul Bhatt) is at work. Jump to his residence where assistant costume designer Anjali Damle (Meera Chopra) arrives with a bunch of dresses required for the next day’s shoot. Sending his maid out on an errand, the director rapes the young girl, who complains to the police and gets Khurana arrested, tried in the Sessions Court and sentenced to 10 years of imprisonment.
Re-enter Saluja as the high profile defence counsel, the sentence having been appealed against in the High Court. Opposing him is Public Prosecutrix Hiral Gandhi (Richa Chadha), one-time assistant to Saluja. In true Baldev Raj Chopra tradition of Kanoon and Insaaf Ka Taraazu, director and co-writer Ajay Bahl (Manish Gupta credited with most of the screenplay), has helmed a gripping drama which culminates in the opening scene. The grossly underrated Akshaye Khanna, with his sardonic smile carries the film on his shoulders. Lending admirable support is Marathi actor Kishore Kadam with his restrained performance as the judge.
“Justice is abstract, law is a fact” is the hypothesis on which Saluja bases his case, aided by incompetent handling by the cops and some astute legal manoeuvring. Cinematographer Sudhir Choudhary’s low-light courtroom scenes adds the right amount of balance to the proceedings.
Excellent research and statistics, complemented by English dialogues and legal terms apart from the above-par acting makes the songless ‘Section 375’ (referring to the IPC section relating to rape and sexual assault) makes it a compulsive watch.