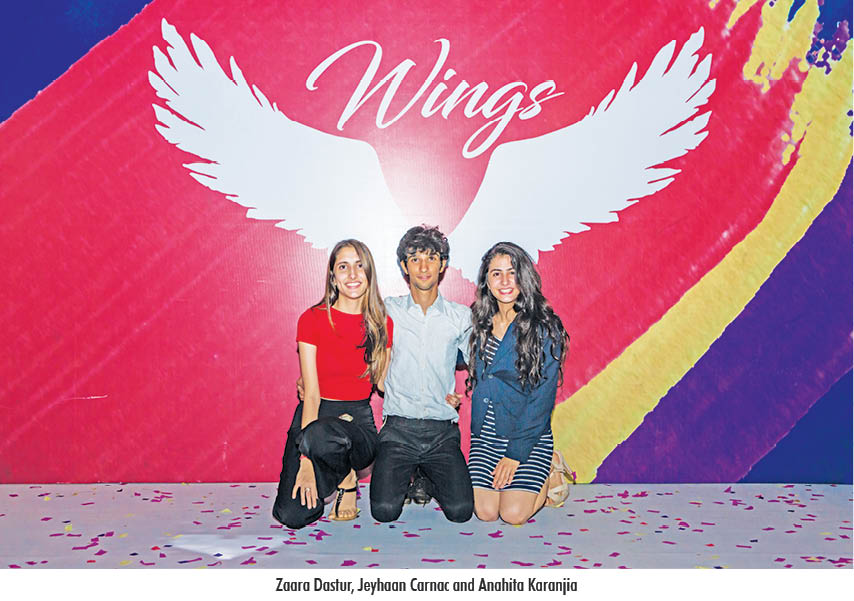 The community’s annual, premier Sports, Cultural and Talent Festival, is back this year – WINGS’19. This November, founders and organisers of this much sought after extravaganza – Zaara Dastur, Anahita Karanjia and Jeyhaan Carnac – launch the fourth edition of their brainchild – Wings’19 – an All Parsi Sports and Cultural event, that will be held across two weekends (instead of the usual one weekend, in keeping with its growing popularity, participation and innovativeness in introducing new events and games) – the 9th and 10th, as well as the 15th, 16th and 17th of November, at the Rustom Baug Grounds. This year, things get even better and more thrilling with WINGS’19 introducing more new, exciting sports – like ‘Foot Tennis’ and ‘Telegames’. As has been the case from the very start (WINGS’16), the Community’s leading newsweekly, Parsi Times, will Media Partner this spectacular event, that has over the years, earned great praise from community members and celebrities, alike.

Here is a sneak-peak into the exciting list of events at WINGS’19:

Table Tennis: With an open singles format, Wings organizes the biggest Table Tennis event in the community, with over 80 registrations including some of our Community’s finest!

Badminton: An open singles format, the 5 day-long event has already received 65 registrations in the past 4 days!

Football: The most popular sport at the event, Wings’19 shall host a 6v/s6 Rink Football tournament, with the goalkeeper permitted to use hands. Limited registrations and slots allotted on a first-come-first-serve basis.

Cricket: A 6vs6 Box Cricket Tournament, with a special ‘Power Play’ allowing teams to receive double the runs they score in an over of their choice.

Paintball: With a total of 45 teams, last year Wings hosted the biggest Paintball event in the community!

Direct Volleyball: For the teens to the veterans, this six-a-side sport gets everyone’s adrenalin pumping!

Indirect Volleyball: The most exciting court event in the world, prepare for classic clashes as the community’s best face each other off in an epic battle!

Speak: Relatively new but hugely popular, Wings’18 organize the largest 5-a-side Sepak tourney in the community. The overwhelming response forced us to add another volleyball court to accommodate the number of games!!

Throwball: This seven-a-side, thrilling all-girls game has been constantly dominated by Team Malcolm Baug. Will the winning streak continue?

Foot Tennis: A new feature with a tennis height net, and only 2 people in a team, the event is a variation of the game. Look out for exciting duels!

Mid-Night Street Treasure Hunt: with clues hidden all across South Mumbai and 4-a-side teams! Sporty or not, you just can’t miss this one!

Telegames: Another new feature, the thrilling Telegames is a combination of skill, stamina, strength and pace – an adventure sport with 5-a-side teams (1 girl compulsory).

1 vs 1 Football: Last year, we hosted this immensely popular, internationally styled, 1vs1 football tournament – the first of its kind – as 2 players face off in a circular cage, with goals on either side.

J.A.M (Just A Minute): Hosted by the country’s number 1 J.A.M Master – Hormuz Ragina, yet another literary event that only happens at WINGS! You need to speak immaculately even as you find faults in other participants who are speaking – it’s fun and hilarious!

YOU KNOW YOU CAN’T MISS THIS!!!