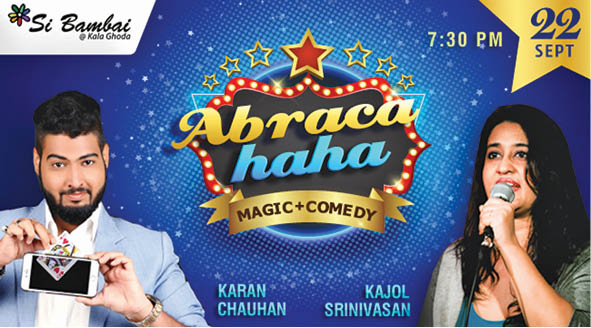 Kajol Srinivasan, who conceptualised the show, is famous for her sharp and witty, tongue-in-cheek political humour, and commentary on current and social issues. She has performed widely at venues including IIT Bombay, the Kala Ghoda Arts Festival, BITS Pilani, Canvas Laugh Club and others. She curates and performs for corporate shows. A Twitter influencer, her tweets are often retweeted by political, Bollywood and Social personalities, as also fellow comedians.

Karan is India’s first Comic-Illusionist and has featured on Star plus and MTV, and performed across the world for over 75 corporate brands. His rendition is far from the typical rabbit-out-of-the-hat magic – his tricks are not children’s entertainment – in fact, the show is for those over 18 years.

Both, Kajol and Karan, are known for their ability to keep the audiences rapt with their performance – and also for a lot of audience interaction. With each of them performing a 30-minute set, the one-hour show will be a combination of sidesplitting humour, funny props and hilarious audience interaction.

What better way to charge your Sunday eve than this, to take on the oncoming week?

Tickets priced at Rs. 300/-. Book them at bookmyshow.com